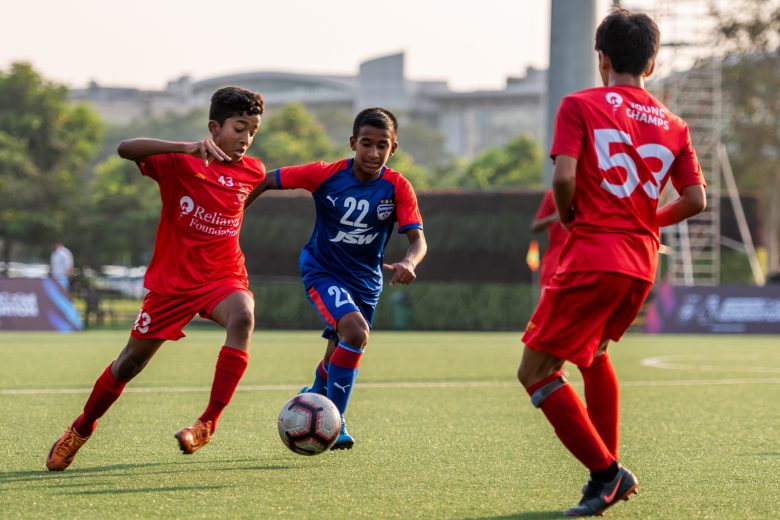 The Reliance Foundation Young Champs managed to find the net in the dying minutes of their thrilling encounter against Bengaluru FC to register a 2-0 victory in an evening fixture on Day 3 of the PL-ISL Next Generation Mumbai Cup 2020 at the Reliance Corporate Park in Navi Mumbai.

As has been their style of play during the past couple of days, the Reliance Foundation Young Champs started off aggressively and looked to impose their attack on the Bengaluru boys. The hosts stitched passes together across the midfield and created a constant threat on the flanks.

RFYC lad Chirag Bhujel, in particular, was impressive as he kept troubling the opponents’ back. The winger created a major opportunity as he raced through the right wing on one occasion and unleashed a strong left-footed shot but could not find the back of the net.

However, Bengaluru FC held on in the first half through their strong defence led by Rajanbir Singh. The solidity at the back allowed the Bengaluru outfit to counter attack and with one offensive move testing RFYC goalkeeper Aniket Ghosh in the 22nd minute.

RFYC continued to ascend in the second half as well and searching for the opening goal of the match. They came close to breaking the deadlock in the 39th minute when Harsh Vaghela saw his shot go wide of the far post from inside the box. Three minutes later, the striker had another chance but his header flew agonizingly above the bar.

RFYC finally found the back of the net in the 49th minute when Aarush Kamath towered above the opposing defenders and deposit the ball in.

Harsh then added to the hosts’ tally in the fourth minute of stoppage time to help the Reliance Foundation Young Champs notch their second victory of the tournament.