Overcoming the hurdles faced since a tender age, Delhi’s Sahil Kumar has made his place into the Chennaiyin FC Reserves Team and has gained valuable exposure on the go.

Team FootballCounter went up and close with the youngster, talked about his thrilling journey and the road that lies ahead.

Here are the Excerpts:

Tell us about your childhood, did you always aspire to become a footballer?

My initial interaction with the beautiful game happened at age 14. Being honest, when I first started playing football with friends, it was an entertainment and a leisure activity. Soon when I saw my seniors playing and slowly got involved with them, they inspired me to play competitively. It was the stepping stone.

When did you first think that you will take up football as your professional career and what are the immediate steps you had to take?

See I belong from a very humble background so taking this step to play football professionally was a tough choice. My love towards the game made me do it.  I started to practice in parks and went to the Jawaharlal Nehru stadium to play with quality players so that I can develop myself as an individual. One day while I was practicing in a park, senior football coach Mr. Raman Kaushal noticed and got impressed by my game. He interacted with me and  introduced me to the Youth Football International (YFI) Academy at American Embassy School. I gave trials and got an opportunity to practice in a great football environment with professional coaches who developed my playing style. I trained for nearly four years at YFI Academy.

Tell us about your experience at Youth Football International and the learnings?

When I joined Youth Football International (YFI), the atmosphere of the academy made me participate willingly. The coaches, ground, facilities were fascinating and it made me push myself to better limits. Money was always an issue and I often struggled to cover my traveling expenses. I ended up deciding to travel by a cycle and covered approximately 12 kms almost everyday. But I would say that I learned quality football. Getting selected for a one-year free scholarship program by Manchester United was the turning point. Practicing under the Manchester United Academy coaches was a great achievement for me and it strengthened my confidence. From there, I worked hard to get a selection call for Delhi Dynamos Football Club, who were going to participate in U-18 I-League.

What did it mean for you to get selected at a club like Delhi Dynamos to play the Junior I-League? Tell us about the season?

Getting an opportunity to play for a club which represented the City at the National Stage meant the world to me. It was the moment I seek for. After I got selected in Delhi Dynamos U-18 team, I was eager to prove myself at a better platform. I reckoned that I had a good chance to get into the Reserves and Senior ISL Team. I played numerous matches for the team in Local B-division League. I really performed well throughout the season and achieved the Man of the Tournament award. It just increased my faith, belief, and passion towards the game.

How was your experience playing at the Santosh Trophy?

I was in the Second Year of my college when I gave trials for Senior National Santosh Trophy Delhi team. Before that, I had not played at any Zonal or School Nationals, so by default that was the biggest national tournament I was going to play. Mr. Paritosh Sharma, the coach of our Santosh Trophy side had a huge role to better our game. Getting quality training, learning the technical and tactical aspects boosted my confidence to perform best. Delhi qualified for the main round of Santosh trophy after 4 years. That year, we qualified from North zone and played the final round in Ludhiana. Unfortunately, we couldn’t hold the place as expected but playing against teams like Goa, Meghalaya, and Services was a great experience for me at the age of 19.  We gave good competition in the tournament but failed to have the last laugh. 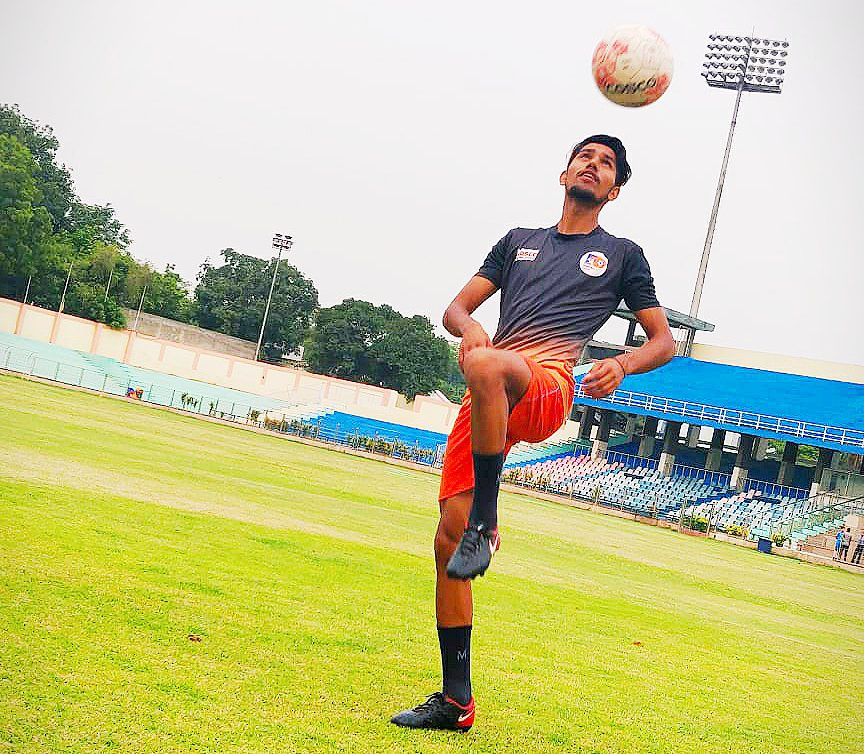 How was your experience to get selected at Chennaiyin and represent them in the 2nd Division and the Durand Cup?

Soon after I represented Delhi at the Santosh Trophy, I heard about trials in Chandigarh for Chennaiyin Football Club Reserves side. It was a very tough fight to get into the Chennaiyin B-Team. Firstly, I went to Chandigarh and gave trials. I was selected for the final round which was scheduled in Chennai. Managing my food, stay, travel and other essentials by myself was very difficult because I didn’t carry many belongings. After giving trials for atleast a month, all my hard work bore the fruits.

I signed for the ISL Franchise. We first played the prestigious Durand cup and then the Second Division I-League. The coach who led us was Mr. Santosh Kashyap. A great personality with immense experience and commitment. He always pushed us to better ourselves. It took me some time for adapting  the new environment but I learned gradually. We gained great exposure clashing swords against top clubs like Mohmmedan Sporting Club, Bhawanipur FC, Hyderabad Reserves, Bengaluru Reserves. I learned a lot and I had a good season with Chennaiyin FC.

What are your goals for the next 5 years?

My goals for next five years is to play for my country and play the ISL. I know it’s not going to be easy. I have to work hard, practice daily with all determination and dedication which requires lot of courage. But I see this as the only way to reach the highest level I promised myself. I have to be there as soon as possible.

How are you maintaining yourselves during the pandemic?

During the pandemic, it is very hard to stay fit. Especially when we were not allowed to go out on the ground. But this is not the only way to keep myself fit I believe. I started maintaining my fitness regime at home with bricks, body weight workouts, stretching, and everything that could possibly be done. It has helped me a lot and kept me fit so that I don’t need to start from zero.