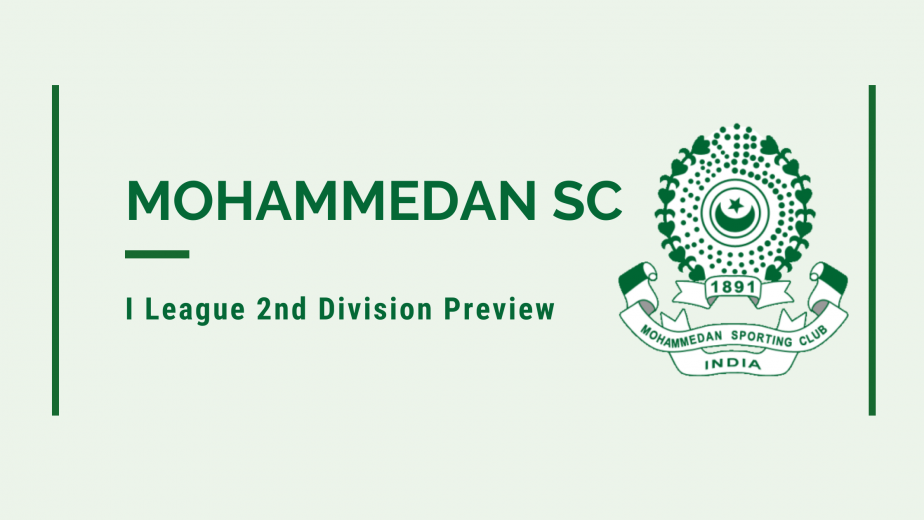 While East Bengal and Mohun Bagan are off to ISL, Kolkata’s third most prestigious club Mohammedan SC aim to get back to their glory days by returning to I League after six long year.

One of the strongest and favourites to win this tournament is Mohammedan SC. The side from Kolkata will be looking to make a comeback in the I-League main division where they strongly believe they belong.  Having won multiple titles like Durand Cup, Federation Cup and Calcutta Football League, the side will be looking forward to get back into I-League after 6 long years of being out of the main division.

The side played a total of 6 games in the preliminary round and won 4 out of those 6 having lost 2. The team scored 13 goals in their 6 games being the third highest goal scoring team in the tournament. John Chidi Uzodinma was the clubs trump card in the preliminary round having scored 5 goals including a hat-trick against Bengaluru FC (B). The Nigerian has however left the club now. His presence will however not be felt as Mohammedan has managed to sign Willis Plaza from Churchill Brothers SC. The Trinidadian scored 8 goals and assisted 3 in I-League main division for 2019-20 season. The 33 year olds pace and guile will will be crucial for the team to win the tournament.

Another player to look out for will be Abhishek Rijal who has joined Mohammedan from JJ Sports Club in Maldives. The 20 year old Nepali became the first Nepali to score in the AFC Cup in 2019. Abhishek also won the ANFA Emerging player of the year award in 2019.

The clubs goalkeeper Priyant Singh has kept 3 clean sheets in the 6 games he has played conceding on 6 goals. His experience will be important for Mohammedan having played for Mohun Bagan, East Bengal and Churchill Brothers SC before.

Their coach, Yan Law, who joined Mohammedan from Minerva Punjab has said, “The team is looking very good even though they had to sit at home for 5-6 months due to Covid-19 lockdown. We cannot expect players to be hundred percent fit for such an important qualifier after being out for so many months. I had the backing of the team management which I respect a lot”.

When asked about Mohammedan making a comeback in I-League, he said “Definitely there is pressure for qualifying but the players are experienced and mature so they know how to handle pressure. The other 4 teams are looking good and we take each opponent very seriously, but we will be ready to go at it. After all Mohammedan will add more value to the I-league than any of the other 4 teams. We are also aiming to bring back a team from Bengal back in the I-League”.

While East Bengal and Mohun Bagan are off to ISL, Kolkata’s third most prestigious club Mohammedan S.C. aim to get back to their glory days by returning to I League after six long year. Read our preview on club – https://bit.ly/3nsEGmy (link in story) #MohammedanSC #IndianFootball #ILeague2ndDivision #blackpanthers

The coach also praised 16 year old Himanshu Jangra, who was with the coach in Minerva Punjab. Law said, “Himanshu is only 16 but he will be a fresh young talent to look out for in the qualifiers. He played I-League main division last year for Minerva and is a very talented and young midfielder”.

Mohammedan will begin their campaign on the 8th of October against Garhwal FC at the Kalyani Stadium in Kolkata.

“We need to break the taboo, have comfortable conversations around menstruation” – Dawn Scott
“Helping Garhwal FC to qualify for the I-League would be a historic moment” – Amey Bhatkal