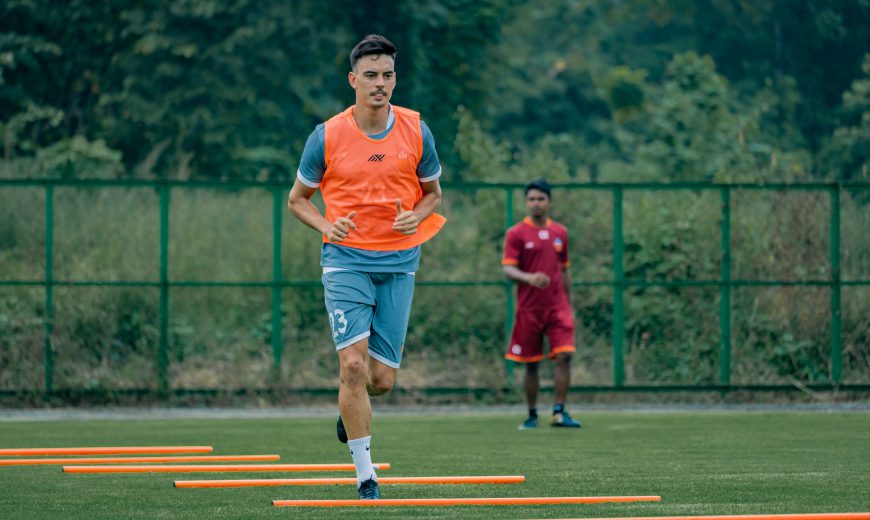 Spanish midfielder Edu Bedia, the club’s longest-serving foreign player will be the new Club captain heading into the 2020/21 season. Lenny Rodrigues will serve as the vice-captain of the team.

In a season that will see the Gaurs compete in the AFC Champions League in addition to the Indian Super League, the Club will be led by a 4-man ‘leadership team’ which consists of Edu Bedia, Lenny Rodrigues, Seriton Fernandes and Ivan Gonzalez.

Bedia has captained the side before in the absence of the main skipper. Speaking on being handed the armband, the Spaniard stated, “I am grateful to my teammates for trusting me. It is a great honour for me to lead the team. I have always felt at home at FC Goa and have been loved by the people here. I take great pride in wearing the shirt and representing the Club. Now I will have an even bigger responsibility on my shoulders. I am looking forward to taking on the responsibility.”

“I believe that in a team with so many new and young players, the captains play a fundamental role,” the Spaniard further added in regards to the leadership group.

“Our first step will be to create a healthy and pleasant work environment. There are plenty of new and young faces in the squad this season and to be honest, I am really impressed with the youngsters. They have adapted very well to the team and have been playing at a high level since the start of the pre-season. On my part, I try to help them build the personality to play for a team like FC Goa while ensuring that they have fun playing.”

“Lenny, Seriton and Iván are very humble and hardworking players and that makes the rest of their teammates respect them.  They are all leaders who have time and again set examples for others to follow and I am really happy to have them alongside me as we look to set the tone early on.”

The Gaffer weighs in

Head Coach Juan Ferrando further explained the process and his impressions of Edu and the rest of the leadership group. “It was a process where every player was involved in, just like every other process here at the club. I wanted the players to decide the captain of the team, themselves. In the voting, they chose Edu as captain along with Lenny, Seriton and Iván,” expressed Ferrando. “After a week of work, the players had time to talk and get to know each other. They were the ones to decide who they wanted to represent them both on the field and in other aspects of their day-to-day life.

“For me, it was important to have a leadership group and not only one player heading as captain. Several people sharing this responsibility allows them to share opinions and implement a final decision in the fairest way possible.”

The coach also elaborated on how the veterans and foreign players will play a role bigger than just getting points for the team. “Not only the captains but all foreign players in the squad know that, aside from their work on the field and on the training pitch, they have the responsibility of helping the youngsters and providing them with the information they might need to grow as a person and a footballer,” remarked the 39-year-old. “That was a pre-requisite when we were signing our foreigners and everyone – Ivan, Edu, Alberto, Igor, Jorge and James in the team are keen on helping the club to cultivate this culture.”

The Indian Super League is set to kick off on 20th November with FC Goa beginning their campaign on 22nd November with a clash against Bengaluru FC.

Also Read: Fan Voice – Igor, Donachie will be key for the Gaurs this season