After two mediocre seasons where the club fought for mid-table finishes, Mumbai Strikers belief on continuity has finally bored fruits as the club is now among top contenders for the play-off.

Mumbai Strikers are currently placed at fourth spot in MDFA Elite (Private) Division with some commendable defensive performances throughout the season. In conversation with footballcounter, Co- Founder, CEO and Main team player of Mumbai Strikers sports club – Rohit D’Souza talks about the improved team performances, defensive continuity and challenges faced this season while Coach Maclin D’penha gives his views on the effect of Covid 19 on the league.

Rohit Dsouza: This is our 3rd season in the Elite Division of the MFL and our 17th season in the MDFA. We have improved over the years and this is our best season in these 17 years. The general perception of a good season is if we win silver ware. However here at MS we see things differently. This is our best ranking in this division and Elite being the top most league of the city; it’s been our best year in our journey.

Rohit Dsouza: We at MS do not make a lot of changes in our squad. We do not react to situations by overhauling our squad. We respect loyalty over quality and invest in our players. We have players who are on a journey with us from non league playing days. We only learn from every season and apply the learning’s accordingly to our game.

At MS, we refrain from doing away with or sacking players. We let them go if they wish to leave. That’s been our process all along this journey. I would credit this to the tactical awareness of the coaching staff and the commitment of the players on and off the pitch.

Rohit Dsouza: Our players played as a team. If we had individual standout performers then some of them should have made it to the Mumbai District Team. It is a question we need to ask. The results on the field speak something and my inference for this difference is we have some of the best team players of the city. We can give our opponents a run for their money on the field and make them sweat.

Rohit Dsouza: After Much effort the public sector Institute and the Clubs were segregated during the 2018-19 season. However there were plans of mixing it, which would again create confusion for a berth in I league for clubs from Mumbai.

However this was averted with 12 Clubs signing a petition to maintain status quo. So the start was a little uncertain, which was a challenge for us to set our goal for the season. This season we had a very limited squad of only 19 players. We also had a change in the coaching staff Maclin D’penha and Varun Dsouza, who were assisting under Sandeep singh, took over the team in between the season.

A challenge we have faced every year is that there is no tentative calendar for the matches so that makes or pre during and post season periods unpredictable but that problem is faced by all the teams right down the pyramid by teams and this can be sorted by a collective effort by all stake holders. 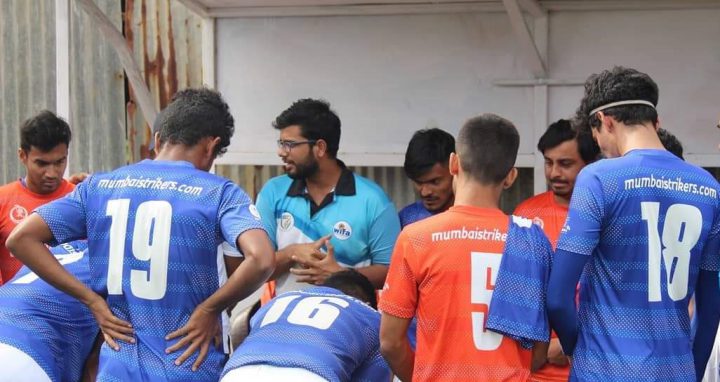 Coach Maclin D’penha: I think it is a unprecedented situation, and obviously as an individual you feel a little disappointed not only because we were having a good run of results, but, also because you are going to stay away from the sport for a while.

The message to them is to stay strong and be positive as we are all in this together, and as far as I know the group, I’m very confident we will all cope well.

EXCLUSIVE: Deepak Devrani set for North East United FC move
Vinil Poojary: “It was a dream to become a footballer, and I’m living my dreams”