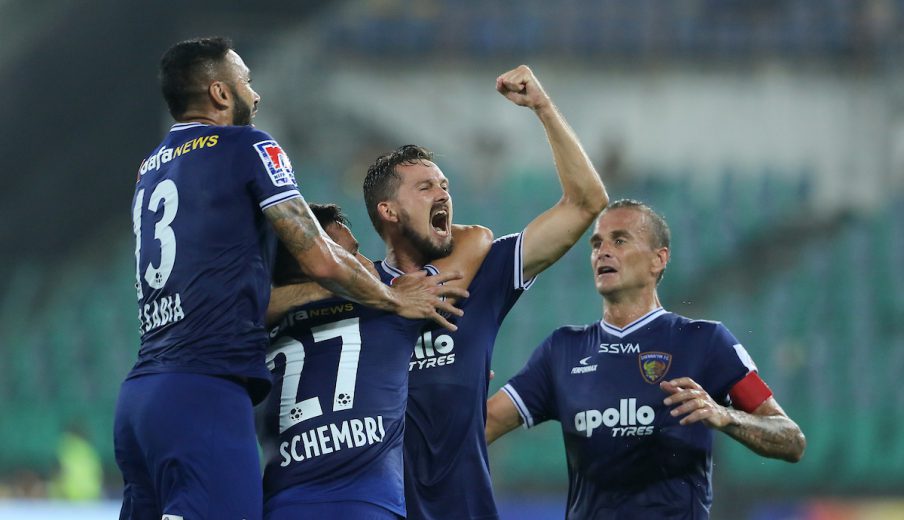 Chennaiyin FC boosted their top-four hopes after an emphatic 4-1 win over Jamshedpur FC at the Jawaharlal Nehru stadium here on Thursday.

A terrific brace from Nerijus Valskis (13’, 74’) and fine strikes from Andre Schembri (42’) and Lallianzuala Chhangte (87’) helped Chennaiyin register their third win on the bounce. Sergio Castel’s (71’) second-half header turned out to be just a consolation for Jamshedpur FC.

The win sees Owen Coyle’s side leapfrog Jamshedpur into the sixth spot, three points shy of fourth-placed Odisha FC. The Men of Steel, on the other hand, have been dealt a massive blow, sliding down the leaderboard.

The home side made an energetic start to the game and made it count in the 13th minute when Andre Schembri received the ball near the half-way line. The Maltese striker drove past a couple of Jamshedpur defenders and slipped an excellent through ball for Valskis. The Lithuanian slid a neat finish past an onrushing Subrata Paul to register his ninth goal of the season.

Immediately, Chennaiyin almost shot themselves in the foot after a bit of indecision between Jerry Lalrinzuala and goalkeeper Vishal Kaith allowed Farukh Chowdhury to poke an effort towards an unmanned goal. But Lucian Goian slid in to deflect it away for a corner.

Chennaiyin continued to dominate the midfield battle which restricted Jamshedpur’s forays forward. They did, however, have a good chance in the 32nd minute when Castel headed over a cross from Bikash Jairu. Shortly afterward, Crivellaro found Schembri’s run into the box with a superb pass but the Maltese forward shot wide with his left foot.

The game opened up towards the end of the first half with chances at either end. Castel should’ve equalised when Noe Acosta’s ball into the box fell for him. But Jerry managed to get a last-ditch block to preserve Chennaiyin’s lead.

That would prove to be crucial in the 43rd minute when Valskis saw his shot parried away for a corner. However, Schembri was left unmarked during the ensuing set-piece and he gleefully headed in Crivellaro’s delivery to double the home team’s advantage. Antonio Iriondo’s answer to the setback was to throw in CK Vineeth for Davide Grande at the start of the second half. Jamshedpur began to see more of the ball as Chennaiyin sat back.

However, they left themselves open to counter-attacks and the home team almost capitalised around the hour mark. A lovely move down the right wing saw Crivellaro outpace Narender Gahlot and find Valskis with the cutback but his shot went over the bar.

But Jamshedpur did find a way back into the game in the 71st minute when Chennaiyin defence switched off and allowed Joyner Lourenco to send a cross into the box from the right wing. Castel was on hand to expertly head it in past Vishal Kaith.

However, any hopes of a comeback from the visitors were extinguished by Chennaiyin within four minutes. Anirudh Thapa fed Valskis through on goal with a brilliant pass and the Lithuanian found the back of the net with an excellent dink that saw him rise to the top of the scoring charts.

The Marina Machans added further gloss to the scoreline late on when Dragos Firtulescu managed to draw a save from Subrata after a brilliant down the right wing. Chhangte was on hand to turn the rebound in to seal a dominant win.