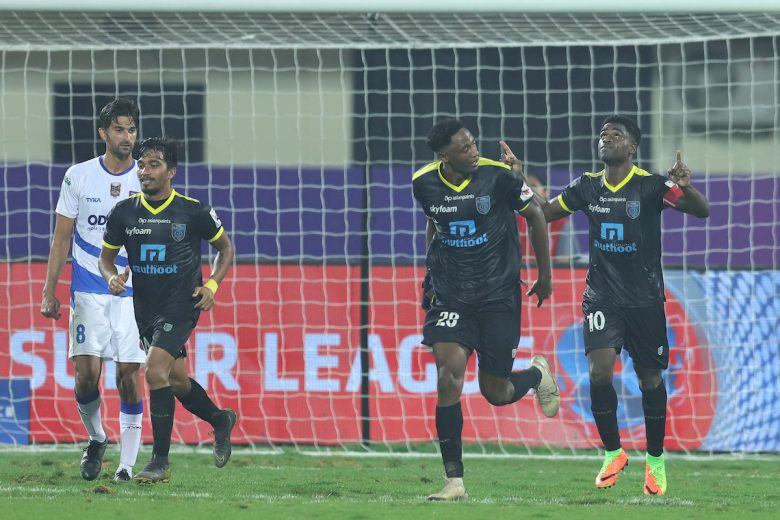 Odisha FC ended their league stage campaign with 25 points while Kerala Blasters finished seventh with 19 points in their kitty.

Odisha FC and Kerala Blasters played an entertaining 4-4 draw at the Kalinga Stadium here on Sunday. Manuel Onwu scored a hat-trick for the hosts while Bartholomew Ogbeche netted twice to lead the Golden Boot standings with 15 to his name.

Odisha took the lead through Manuel Onwu in the very first attack of the game. Jerry Mawihmingthanga’s cross saw Onwu head it first time as he left Bilal Khan stranded to his position to make it 1-0.

However, Kerala equalised soon after as Messi Bouli crossed into the box which saw Narayan Das slam the ball into the back of his own net. Kerala came close to scoring again as Jessel Carneiro’s corner-kick found Ogbeche in space and the Nigerian’s strike ended up on the side-netting.

The visitors eventually went ahead 2-1 when Carneiro’s cross was comfortably controlled by Messi and with his second touch slammed it home to beat the goalkeeper. In the 36th minute, Onwu scored his second of the evening; this time from a set-piece as his free-kick sailed into the back of the net.

Odisha could have made it 3-2 as Jerry went on a mazy run before he laid the ball for Daniel Lalhimpuia whose shot was fisted out for a corner by the goalkeeper. Raju Gaikwad’s foul cost Kerala as he brought down Onwu inside the box which left the referee with no option but point at the spot. Martin Guedes converted from the penalty despite Khan diving to his right to make it 3-2 for the home side.

Onwu completed his hat-trick in the 51st minute as his free-kick went straight into the far corner to take his goals tally for Odisha to seven from four matches. Around the hour mark, Lalhimpuia had a chance to add his name to the score-sheet but his attempt went inches wide. Xisco Hernandez was denied by the crossbar as he got on the end of a Nandhakumar pull back and his first time shot came off the woodwork.

Nandhakumar too could have joined the party as his effort came off the crossbar as Kerala’s defence once again was found wanting. Shubham Sarangi was guilty of bringing down Ogbeche inside the box and the Blasters skipper beat Dorronsoro from the spot.

Deep into injury time, Ogbeche was caught on his neck by Dorronsoro and the subsequent penalty was dispatched in style by the Nigerian as he scored his 15th goal of the campaign.