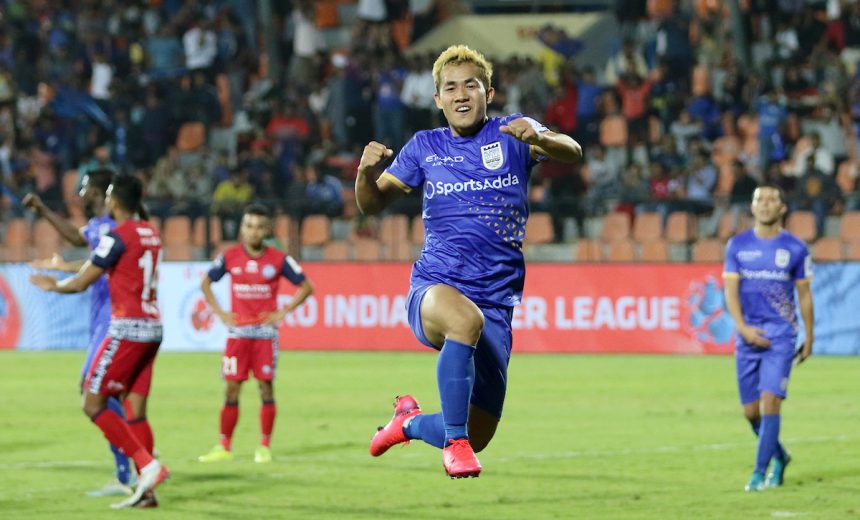 Mumbai City FC gave their hunt for play-off spot a massive boost after a dramatic 2-1 win over Jamshedpur FC courtesy of injury time strike from Bidyananda Singh at the Mumbai Football Arena here on Thursday.

Noe Acosta’s (7′) early penalty handed Jamshedpur the lead. But Mumbai City pegged them back, courtesy a header from Amine Chermiti (60′) before a late injury-time strike from Bidyananda Singh (90+2’) handed Mumbai the win. The Islanders are now five points clear of fifth-placed Chennaiyin FC with 26 points from 16 games while Jamshedpur are now seventh on the table and have seen their chances of reaching the play-offs end.

The game sprung to life minutes after kick-off. Sergio Castel headed an Aitor Monroy free-kick straight at Amrinder Singh before Sourav Das made a clumsy challenge that brought down Farukh Choudhary inside the box. Jamshedpur broke the deadlock in the fifth minute as Noe Acosta sent Amrinder the wrong way from the resultant penalty.

Mumbai tried to mount an immediate response. Diego Carlos played a cross-field diagonal for Raynier Fernandes whose powerful low strike from the right forced a good save off Subrata Paul. Close to the half an hour mark, Carlos, Amine Chermiti and Raynier combined well in and around the box to set up Mohammad Larbi with a good chance to shoot but the latter’s hurried strike flew over the bar.

Minutes later, Monroy launched a counter-attack and found Castel’s dangerous run into the box. The on-loan Atletico Madrid striker outfoxed Pratik Chaudhari inside the box but his shot was blocked by Mato Grgic. Mumbai bossed the midfield after the restart but struggled to carve out clear-cut chances against an organised Jamshedpur defence. Subhasish Bose unleashed a fierce left-footed shot from the edge of the box to test Paul but the experienced goalkeeper was up to the task.

The pressure soon paid off as the hosts equalised at the hour mark. Chermiti escaped Narender Gahlot’s attention inside the box and headed into the net from a well-taken corner-kick by Carlos. Carlos threatened from the right again as the Islanders pushed for a second goal. Serge Kevyn failed to connect the Brazilian’s low cross into the box in front of an empty net.

Amrinder Singh, who did not have much to do for most of the second half, pulled off a brilliant reflex save in the 84th minute to keep the scoreline intact. Acosta’s curling cross was headed towards goal by Castel but Amrinder denied the striker from close range.

That save would prove to be crucial as substitute Bidyananda Singh came up with the match-winner for Mumbai in injury time. Pratik headed a hopeful cross into the box into the path of Bidyananda who hit a brilliant strike from the edge of the box that beat Paul and went in.

NorthEast left with too much to do as Ogbeche returns ‘home’
2nd Division I-League: Mumbai City Reserves hold FC Kerala to a draw