Kolkata, October 14, 2020: Goals from Philip Adjah and Pankaj Moula helped Bhawanipore FC withstand a late fightback from Garhwal FC and seal a 2-1 victory in the Hero I-League Qualifiers 2020 at the Vivekananda Yuba Bharati Stadium in Kolkata on Wednesday (October 14, 2020).

The team from Kolkata were very much the favourites, having picked up all three points in their opening game against FC Bengaluru United, while Garhwal entered the tie on the back of two defeats without having found the back of the net.

Garhwal started brightly, playing good possession football to put Bhawanipore on the back foot. However, they were undone by a brilliant pass from the halfway line by Arijit Bagui in the eighth minute, as he played a delicate chip over the Garhwal defence. Ghanian striker Adjah, timed his run to perfection to beat the offside trap and slotted the ball past Sayak Barai, who had no chance in a two-on-one situation.

Vikas Rawat’s side was forced to make an injury-induced substitution in the 12th minute with Afdal Varikkodan replacing Nigerian striker Victor Philip. The unplanned substitution almost paid off with Varikkodan getting the better of the experienced Kinshuk Debnath in the 16th minute but his shot was blocked by Shilton Paul in the Bhawanipore goal.

Just a minute later, Garhwal were presented with another golden opportunity as Paul’s save from a free-kick fell straight to Rahul Das. However, the Garhwal defender couldn’t connect cleanly with his header from close range.

At the other end, Adjah was once again sent through on goal in the 25th minute — this time via a well-disguised reverse pass from Anup Raj. This time though, the Ghanian, who scored with a sumptuous volley in the previous game, sent his shot flying over the crossbar.

Garwhal enjoyed the lion’s share of possession (67%) in the first-half but failed to make much of it, walking back to the dressing room with a one-goal deficit at half-time.

Bhawanipore doubled their advantage five minutes after the break as Raj kept his marker Neeraj Bhandari at bay and sent in an accurate cross from the left-flank for an unmarked Moula, to head powerfully past the keeper — his second goal of the tournament. 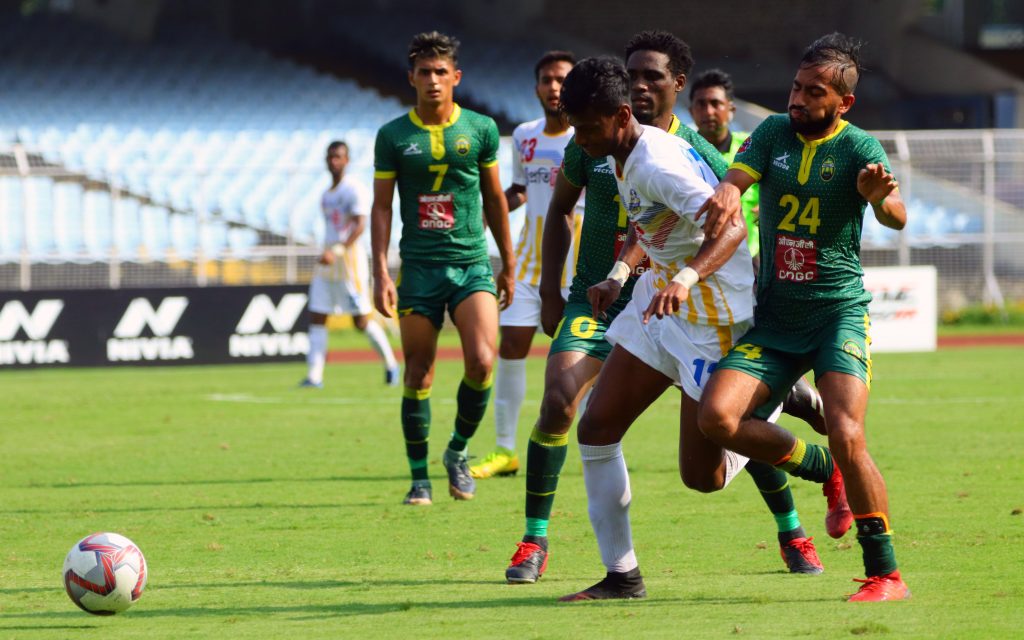 Adjah had another wonderful opportunity in the 61st minute as he bulldozed his way past two defenders after bringing down a chipped pass from substitute Jiten Murmu but his scooped effort sailed over the crossbar.

Garhwal looked like the hungrier side and finally ended their goalless streak in the tournament in the 76th minute. Rahul Das was the first to react to a poor clearance and pulled the ball back from the by-line for Varikkodan to tap in from close range.

The goal set off a nervy finish to the game with Bhawanipore eager to match rivals Mohammedan Sporting’s tally of six points from two games, while Garwhal were fighting to stay alive in the tournament.

Murmu, who was excellent after coming on as a substitute, played another brilliant through ball to Adjah in the 85th minute but once again, the Ghanian fired over the bar. Garhwal couldn’t make their opponents pay for all the missed opportunities as the Bhawanipore defence weathered the late storm to preserve their hopes of sealing the coveted Hero I-League berth.

Speaking post-game and reflecting on their upcoming fixture, Bhawanipore coach Sankarlal Chakraborty said, “It will be very tough (playing against Mohammedan Sporting Club). They are a team who have enjoyed great glory in our country. For me, it’s not just a team but an institution. A lot will depend on how we recover from today’s game.”

Reflecting on his side’s performance, Garhwal FC coach Vikas Rawat said, “We have got some good learning today from Bhawanipore. We respect the team a lot. They have shown a masterclass in defending — the way they move and the counter-attack. We are going to take it to the ground and again, come back stronger against ARA FC.”

The win sees Bhawanipore match Mohammedan Sporting’s points tally (6) at the top of the points table while Garhwal fall out of the race for the top spot. The two sides go up against each other in what could prove to be a pivotal encounter at the Kalyani Stadium on Friday (October 16, 2020). Garhwal will also be in action at the same venue, going up against ARA FC on Friday as well.

Nine graduates from RFYC set to embark on professional playing career with ISL
“After six months of lockdown, everything is different for us” – Awais Shaikh, Founder Feugo Tormento FC