Thomas Dennerby: “Players adapting steadily to what we’re searching for” 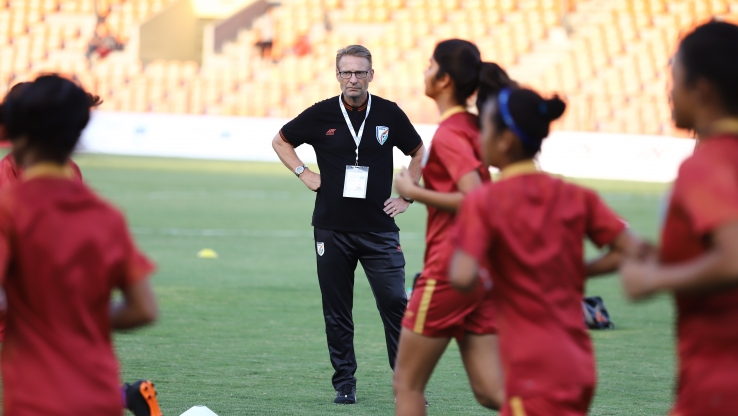 A spirited Indian side went down to Sweden on Friday (December 13, 2019) in the opening match of the U17 Women’s Football Tournament 2019 at the Mumbai Football Arena. India head coach Thomas Dennerby, taking charge of his first international game since his appointment in November, stated that despite the 0-3 scoreline, he was “proud” of the team.

“We always want to win and can never be happy when we lose. We know Sweden are a strong team in Europe and everybody knows their senior team won the bronze medal at the World Cup this year. We should start with that. I’m definitely proud of the girls and we created some really good scoring chances. Maybe the accuracy wasn’t enough in the final moments, but it’s something we are working on,” Dennerby said.

It has been less than two months since the arrival of the new coach and he mentioned that he can see a visible effort to adapt to the new system from his charges. He stated, “You can start to see — in all departments — defence, midfield, attack, that the girls are adapting more and more to what we want and are searching for. The vision is long-term and they are trying to adapt.

“With a new coach, it takes a little time for players to see what he is looking for. I think they are definitely doing very good at trying to follow the team’s plans,” he added.

Along with the hosts, the U17 Women’s Football Tournament 2019 sees Sweden and Thailand take part — both nations with a formidable record in women’s football — cemented by the fact that their senior teams were both in the final round of the FIFA Women’s World Cup 2019. Dennerby talked about the importance of playing quality opposition and the players getting used to it.

He said: “You need to get used to playing against quality opposition. I can try to tell the girls when they have training that you need to reach this level with strength & conditioning, first touch etc. But the best way to learn is doing it on the pitch and to understand in-game situations.”

In the match on Friday, Sweden took the lead as early as the fourth minute from the spot but the Indians fought back, with Lynda Kom coming close to scoring twice in the first 20 minutes. In the second half, the Swedish attackers were kept mostly at bay by the home side’s backline and India winger Sumati Kumari caused a lot of problems for the opposition defence, running in on goal and putting in some dangerous crosses.

Dennerby reiterated the same, saying that the team got “better and better” as the match progressed. He said, “Maybe we showed a little bit too much respect in the beginning of the match and were a little bit anxious in the first 5-6 minutes. However, we became better and better. The second half was definitely good. We were compact and didn’t let Sweden create many chances. We have work to do but from our point of view, it was a good start because we played a really good team.”

Talking about the team’s style of play, Dennerby made it clear that he wants them to develop a fluid and passing one, and games such as the one against Sweden will make them “more and more comfortable” on the ball.

“I want us to learn to play from behind and have a passing game. There will be some errors when you’re trying to build from the back and sometimes players, when they are stressed, choose to take the longer kick when they have the chance to play a better pass. With time, they will get more and more comfortable to play games like this and hopefully we can bring that stress of kicking the ball away from their shoulders,” he concluded.

The Indian team will play their next match of the tournament on Tuesday (December 17, 2019) against Thailand at the Mumbai Football Arena. It can be watched live on the Indian Football Team Facebook page, with kick-off scheduled for 6 PM.