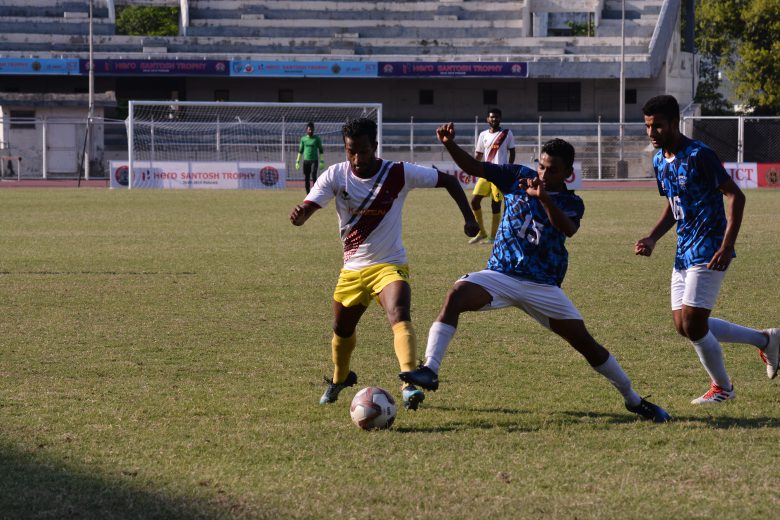 In a thrilling semi-final encounter of 2019 Santosh Trophy, 10-man Karnataka succumbed to a disheartening loss via penalty shootout against a resilient Services side at Guru Nanak Stadium in Ludhiana on Friday evening.

In an enticing encounter, Services broke the deadlock early in the game, when a Lallawmkima strike found the back of the net with just 7 minutes on the clock. The early goal rattled Karnataka who tried their best to equalise with hordes of attacking forays, however a resolute defence of Services held on to their line to keep Karnataka at bay.

In the second half, Karnataka continued to pile pressure on Services with series of attack which the well dealt by Services defence. Things turned from bad to worse for Karnatak when in the 70th minute, defender Ashik A S was given the marching orders for a rash tackle near the Karnataka penalty area.

However against all odds, Karnataka finally managed to find the equalizer with six minutes left on clock when substitute Nikhil Raj ran through into the Services box and slipped it past the keeper to bring the game back on level terms.

The game entered extra-time with both sides playing cautiously with fatigue and heat playing the part as the intensity dropped. The game proceeded to Penalty shootout after the scores remained on level after the end of extra-time.

Karnataka skipper Vignesh Gunashekar missed the sides opening spot-kick as his attempt crashed into the post. Services followed it up with scoring all their four penalties in between, In the fifth attempt, Karnataka once again missed when substitute Manoj Swamy Kannan hit the fifth spot-kick wide, to send Services to the final.

This was Services 11th Santosh Trophy final in its history and will now face host Punjab for the title, who had earlier defeated Goa 2-1, at the same venue on Sunday.

World Corporate Champions Cup India Qualifiers to kicks off on 27th April 2019
Gurpreet Singh Sandhu: It’s more about having that sporting culture in our country