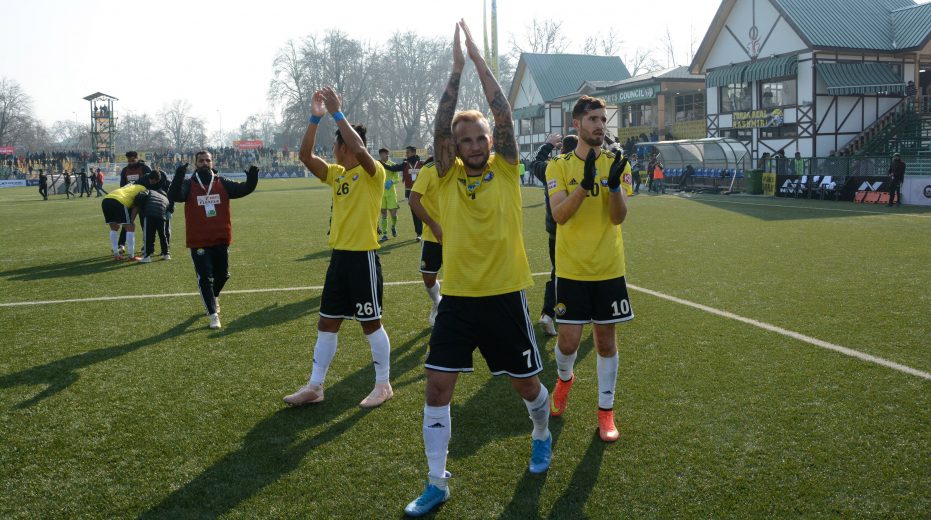 Real Kashmir FC registered their first win of their Hero I-League season, as they went on to defeat defending champions Chennai City FC 2-1 at the TRC Ground, Srinagar on Thursday, December 26.

Danish Farooq gave the hosts the lead before Bazie Armand doubled their advantage. Syed Suhail Pasha pulled one back for the visitors, but the Snow Leopards held on to bag all three points.

David Robertson made just a couple of changes to his previous line-up. Singam Subash Singh started upfront at the expense of Gnohere Krizo, who made the bench. At the back, Bazie Armand was given the nod ahead of Dalraj Singh, in what seemed like a 3-5-2, reminiscent of a modern-day catenaccio.

Chennai City, despite not hitting full throttle in the league yet, made just one change. Akbar Nawas named Pradison Marivadasan in his starting eleven, with Bijay Chhetri making way for him.

Back in front of their Srinagar faithful, it was Kashmir who kicked-off proceedings, being firmly in the driving seat. Their quick and fluidic, yet disciplined passing and movement was almost too much for Chennai to handle in the early stages.

The first glaring opening of the match arrived in the seventh minute, when a beautiful cross delivery from Kallum Higginbotham found Mason Robertson, who tries an audacious chip over Nauzet Garcia Santana, but the Chennai custodian exhibited quick reflexes to deny him.

Real Kashmir kept the pressure on, not allowing the Southerners a moment’s respite.

In the 13th minute, some smart footwork by Danish Farooq, followed by an exquisite rabona flick with his weaker foot put Higginbotham through down the right. The Englishman bulldozed his way into the six-yard box and passed it across goal for Mason Robertson to tap it into an open net, but the ever so reliable Scot made a total hash of it, flicking it over instead which again fell to a lurking Bazie Armand and to everyone’s surprise, he missed the target too.

The deadlock was finally broken in the 22nd minute, when an exquisite set-piece delivery from Higginbotham found Danish Farooq in the box, who waved off his marker and made just the right contact with his head, to give Real Kashmir the lead through a clinical header. Santana got a hand to it, but the sheer venom in the header took it past him.

The hosts were turning on the style and doubled their lead in the 27th minute. Yet again, it was Higginbotham who was involved in the mix. He cut inside on the left, which created some space for him to deliver another immaculate delivery into the eighteen box and Bazie Armand was at the right place and at the right time to soar the highest and head it into the top corner, leaving Santana stranded between the sticks.

Kashmir almost added a third in the 39th minute, when Mason Robertson was through yet again and with Roberto Eslava on his toes, he took it past the Chennai skipper and fired across goal aiming for the far post, but it sailed inches wide, much to Akbar Nawas’ relief as Real Kashmir headed into half-time with a two-goal cushion.

Chennai City came out in the second half, knowing very well that they need to pull one back sooner rather than later.

The visitors put their half-time team talk into practice when they reduced the deficit in the 48th minute. A cheeky back flick by Pravitto Rajju generated just the right elevation for Jockson Dhas to head it past Phurba Lachenpa in the Kashmir goal to bring the game right back in the balance.

Despite Chennai’s newfound surge, it was Kashmir however who looked likelier to score the next goal.

In the 68th minute, the game should have been put to bead but Loveday Okechukwu, who was completely unmarked failed to tap in another Higinbotham set-piece, blasting it high and wide.

In the closing stages of the game, the visitors failed to stitch together any real threat as the Snow Leopards held on to register their first win of their Hero I-League campaign, duly rewarding the Srinagar aficionados who braved the cold to get firmly behind their team.

The win takes Real Kashmir to seventh place in the Hero I-League standings with five points, while the defending champions drop to eighth place with the same tally, but with an inferior goal difference of -2.

Local lad Danish Farooq was adjudged to be the Hero of the Match.