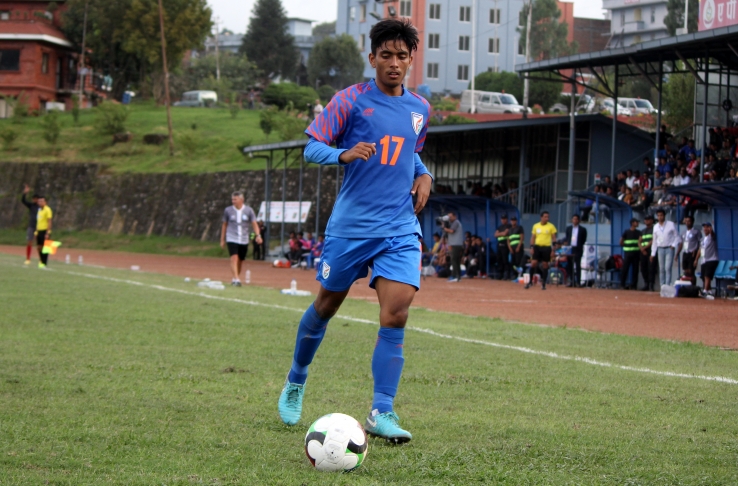 The score was locked at 1-1 and the match looked to be headed towards extra time before a certain Ravi Rana decided to take matters into his own hands, or rather feet. Sensing an opening, he sent down a thunderous effort from 30 yards that rifled into the top corner – ensuring that India clinched the match and as a result, their first-ever SAFF U18 title as well in the process.

“There was a lot of emotion involved in the final. We were disappointed after drawing against Bangladesh and were determined to make things right in the final. I saw the angle was open for the shot and I’m glad the ball sailed in. It was a really special moment for me and I’m glad I could contribute to the victory,” the youngster said while recalling his heroics from September this year.

Born in Jammu, a young Ravi followed his brothers and developed a love for the beautiful game at a very young age. He recalled, “I have three elder brothers and I started playing football seeing them. We used to play on the roof our house all the time and when I turned nine, I joined a local club named Shaheen.”

He moved to Jamshedpur in 2016 to pursue his footballing dream and just a year later, he broke into the junior national team set-up and made an explosive debut in Indian colours in the SAFF U15 Championship, scoring a hattrick in a 9-0 win against the Maldives.

Rana was also a vital part of the side that reached the quarterfinals of the AFC U16 Championships last year – starting in all four matches for coach Bibiano Fernandes’ team.

“Playing in the AFC U16 championships was a great experience. The whole team was determined to qualify for the U17 World Cup and we came so close to achieving our target. I learned a lot from the whole adventure,” he stated.

Since then, the midfielder has stepped up to the U19 level under coach Floyd Pinto and was part of the team that finished first in the OFC Youth Development Tournament in Vanuatu before the SAFF U18 triumph.

The next challenge for the team is the upcoming AFC U19 Qualifiers in Saudi Arabia, which begin on November 6 and where the colts are expecting a tough challenge but are determined to continue their “winning momentum”.

“Winning in Vanuatu and Nepal has given the team a great boost. It’s always a great feeling to win and we will now look to continue the momentum into the qualifiers. We have been preparing hard for it. The coach has shown great faith in all of us and is constantly motivating and pushing us to give our best,” he rounded off.