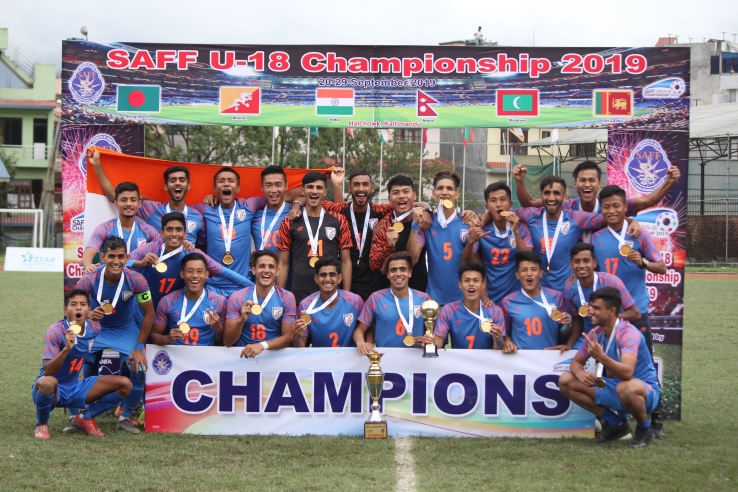 “Indian Arrows has helped me reach where I am,” exclaimed the lanky goalkeeper Prabhsukhan Singh Gill as one could sense a lump in his throat.

“It’s the biggest part of my career so far and it has really given us a kickstart to propel ourselves to the next level,” he further continued.

The India U19 team, which will go up against Afghanistan, Uzbekistan and hosts Saudi Arabia in the AFC U19 Qualifiers from November 6 onwards, features a number of players who have played two full seasons of senior-level football in the Hero I-League for the Arrows, including Gill, who has amassed over 2700 minutes between the sticks for AIFF’s developmental side.

As his side prepares for the challenge ahead, Gill explained how playing for the Arrows has made him “mentally strong”.

“It doesn’t matter who I am facing, be it Argentina or Oman, I play without fear. Playing in the Hero I-League has made me mentally strong. Initially, the physicality of the league was a challenge but now I am ready for anything. Last season, we put in some really memorable performances and it was a great experience to be a part of the team,” he said.

The Arrows, under the leadership of coach Floyd Pinto, were a major talking point of the 2018-19 Hero I-League campaign, where they picked up 21 points.

A key member at the back for the team was Jitendra Singh, who made 32 appearances for the team over two seasons, called the Arrows “one big family” and spoke about him and his teammates grew as players.

He said: “The Arrows project benefitted all of us immensely as we got to know how to compete with the seniors at the professional level. Even if we lost a match, we always learnt something new from each game and develop ourselves. It was a really special feeling being together with those set of players and we were all like one big family. I would like to thank the AIFF for this project as it helped us step into the world of professional football.”

The youngster from Kolkata scripted a piece of history in the 2017-18 season, becoming the youngest scorer ever (at the time) in the Hero I-League when he found the net against Shillong Lajong in a 3-0 win in Delhi.

“It is my most memorable moment with the Arrows as it was my first goal for the team and enabled us to win the match as well,” he said.

Under senior team head coach Igor Stimac, two players from last season’s Arrows batch also made their debuts for the Blue Tigers, with one of them being centre-back Narender Gahlot, who also found the net in the Hero Intercontinental Cup 2019 against Syria.

He was one of the star performers for Floyd Pinto’s team and spoke about how playing against foreign players and seasoned professionals helped him “mature” in his game.

“I found it difficult at the start of the season and it took some time to settle. However, as we played more, I improved in terms of my maturity and reading of situations. My favourite memory was doing a double over Shillong Lajong, especially the away win against them,” he said.

“There’s no pressure at all,” the 18-year-old said when asked if playing for the senior team brings with it an added responsibility when playing at age-group level. “I just have to focus on my game and avoid any complacency. All of us in the team keep interacting with each other and learn from each other,” he concluded.