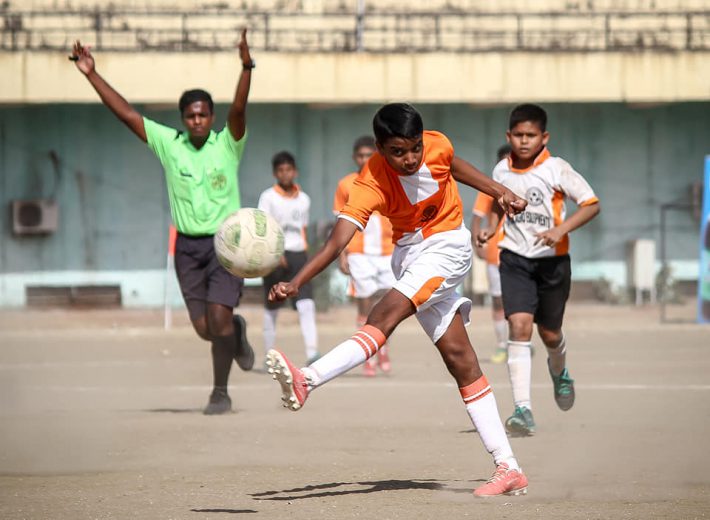 What a finish to the quarterfinals of the 2019 WIFA Inter-District Championship Sub-Junior Boys. Nagpur rose to the occasion as they dumped out in-form Thane. Stand-in goalkeeper Nitin Gupta saved a late spot-kick to send Thane tumbling.

Kolhapur beat Amravati 8-0 in the second game. The trio of Prashant Salawade, Gandharva Chavan and Sanket Medhe starred in another goal riot. Salawade grabbed a hat-trick while Medhe hit four goals. Chavan wrapped it up with a fine effort in the dying minutes.

Pune and Ahmednagar battled it out in the third game. Goals from Vinit Chauhan and Tushar Durga won it for Pune. The game was a test of mettle and character as both teams went toe to toe.

The best was reserved for the last as Nagpur beat Thane in a cliffhanger. The game had drama dime-a-dozen! Utkarsh Mankar scored in the 14th minute for Nagpur. What a goal it was… a fine solo effort! It was his fifth goal in two games. Thane just couldn’t break past a wall of Orange shirts. And as Manav Sharma’s shot whistled past the post in the second-half…Thane knew that it just wasn’t their day! Stand-in goalkeeper Nitin Gupta parried away Thane’s spot-kick in the dying minutes to end their misery. As Nagpur celebrated…Thane had thrown away a lifeline!

If the quarterfinals had us on the edge of our seats here’s hoping that the semi-finals would also run on the same theme. The football caravan marches on.

HDFC Sukesh Shastri: “We were hungry for a win.”
The impact of the Asian cup will be huge for Indian football, states Gurpreet Sandhu