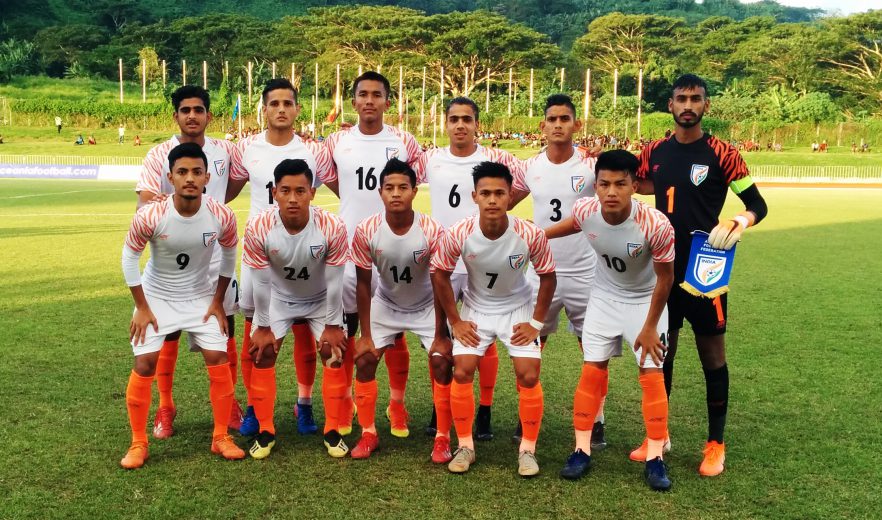 Sumit Rathi’s (78′) second-half strike from the top of the box earned India U19 National Team a 1-0 win against hosts Vanuatu in their opening fixture of the OFC Developmental Tournament 2019 at the Korman Stadium in Port Villa, Vanuatu on Sunday (August 18, 2019).

Coach Floyd Pinto opted to field four defenders at the back while Aman Chetri was put upfront in the attacking third who rattled the crossbar in the third minute of the match. Off the rebound, Chetri took another valiant attempt from close range but the opponent goalkeeper parried with it safely.

Givson was mostly operating a free agent in the middle of the park while Vikram Partap Singh was gunning from the right flank. Vikram and Givson kept the Vanuatu defender on their toes but the hosts somehow managed to keep a clean sheet until the end of the first half.

After the breather, India earned back-to-back corners in quick succession but to no avail. Coach Pinto, having put in Gurkirat Singh at the expense of Aman Chetri, tweaked in his strategy in their pursuit of the elusive goal. Givson, on 73 minutes, tried his luck from 40-odd yards only to see his shot sail over the crossbar. Five minutes later, India finally got the breakthrough from what was India’s fourth corner of the day.

Givson took a short corner to Ninthoi who on receiving the same, rolled it to Vikram who, from the edge of the sideline, pushed to the opponent box and Sumit Rathi, having snuck in losing his marker, found the back of the net eventually.

The Vanuatu boys who were donning their yellow jersey tonight switched the gear towards the end in their quest for the equaliser but the Indian defenders along with the goalie Prabhsukhan Gill who was donning the captain’s armband today made sure India leave the pitch with all three points.

India will face off with New Caledonia in their next fixture on Wednesday (August 21, 2019).