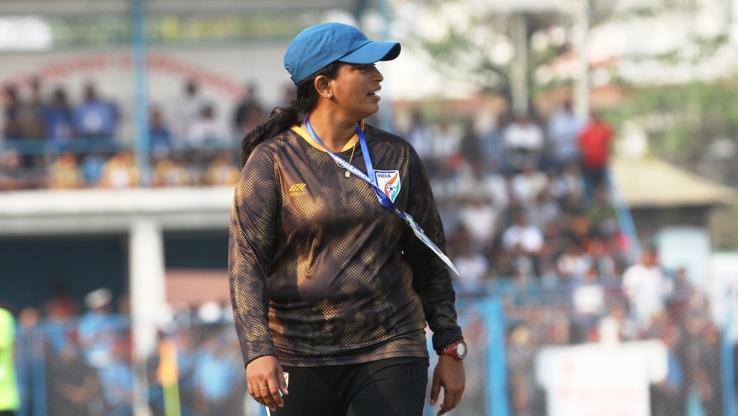 Maymol Rocky, the Head Coach of the Senior Indian Women’s Team believes that the frequency of playing international competitions has helped the players keep themselves in shape all year round.

Speaking to the media on the first day of the camp, Maymol Rocky was all praises about the growing exposure that her team is hgettting.

“We are playing tournaments or international matches at frequent intervals,” she said. “We have camps almost every month now, and that is something that helps the players keep up their fitness. ”

The Women’s team has had a busy schedule this year, having played the Hero Gold Cup, the SAFF Championship, AFC Olympic Qualifiers Round 2 in Myanmar, followed by an exposure tour to Turkey, the COTIF Cup in Spain, and two international friendlies against Uzbekistan.

Speaking about the upcoming matches, she said that the Indian girls will be facing a tough challenge against Vietnam.

“Vietnam is a very good team, and playing tough opposition like them is crucial for the development of our side,” she said. “They have recently beaten Thailand, which is a World Cup team, so they definitely have quality.”

The coach further went on to state that the interest in women’s football in India has been growing, and that regular domestic tournaments have helped the cause.

“A lot of tournaments are coming up. Before, if you see the NFC champions, it was mostly restricted to states like Manipur or West Bengal,” she said. “Now other states are also growing in Women’s football. I’m happy that the women in our country are getting the chances now.”

She believes that the fact that India is hosting the 2020 FIFA U-17 Women’s World Cup in will further help popularise the women’s sport in the country.

“I am very happy that we are hosting the WC. By the time the WC comes, the awareness about women’s football will grow exponentially,” said Rocky.

As the team prepares for the matches against Vietnam, Maymol believes that her charges are up for the fight.

“It’s clear the women’s team and women’s football in India is growing. The girls are getting better, and the future definitely looks brighter for them,” she further said.

“We are prepared for the challenge, and we’ll give it our best in the two matches against them,” she rounded off.

Hero I-League 2019-20 season will commence from 30th November, 2019
Thoiba Singh – “Playing in the I-League was a phenomenal experience,”