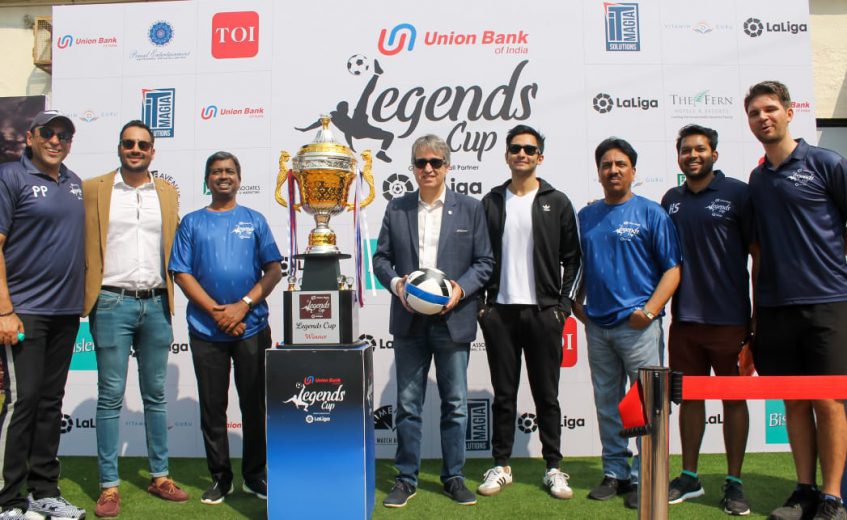 A bright morning in the Astro Park at St. Stanislaus, Bandra witnessed the launch of the fifth edition of the largest corporate football tournament in India. The ‘Legends Cup’ was launched today here on 9th November in the presence of Jose Antonia Cachaza, Managing Director (India) of LaLiga; television actor Rohan Mehra and Mr M. Venkatesh & Mr Satyanarayena P. from Union Bank of India.
The Legends Cup, which has its name scripted in the Limca Book of Records, is considered to be the largest Corporate Football Tournament in India. Annually, it attracts the participation of thousands of individuals across the country – CEOs, interns, middle management personnel, and senior executives – in 6 major cities – Mumbai, Delhi, Bangalore, Hyderabad, Kolkata and Pune.
The tournament not only enables the executives and their lower management bond well, but it also opens up a space for networking with others. The primary motive of the Legends Cup is to provide corporates with a platform where they can express their sporting prowess, stay fit, and enjoy the satisfaction of the game.
Although competing with their teammates in the football arena is with a common goal in mind: VICTORY! The reward to the triumph, however, is very fascinating as the winners go on a trip to Spain to view a LIVE LaLiga match, courtesy of their Global Football Partner, LaLiga.

The National finals are slated to take place on February in Delhi where all top city champions will fight for the legend title. Union bank has come on board to support this movement. This is the first year of their association. “It is great to associate with the largest football corporate tournament and hope to continue the journey” quipped Mr. M. Venkatesh, General manager Corporate Communication, Union Bank of India

Other brands like Vitamin D Guru, Fern Hotels, Time Avenue, Bisleri and Prem Associates, have also ventured into this stage to make this event bigger than ever.

“The football revolution in India has got new wings across 500 corporates who are flexing their muscle to spread fitness across 5000 employees in 6 cities. We are happy to be pioneer this movement and will keep pushing to new boundaries for a fitter India” claimed Pranav Premnarayen, Director of The Legends Cup and partner of Prem Associates, that has helped conceptualize and execute The Legends Cup.

So, Are you ready? BE A LEGEND!