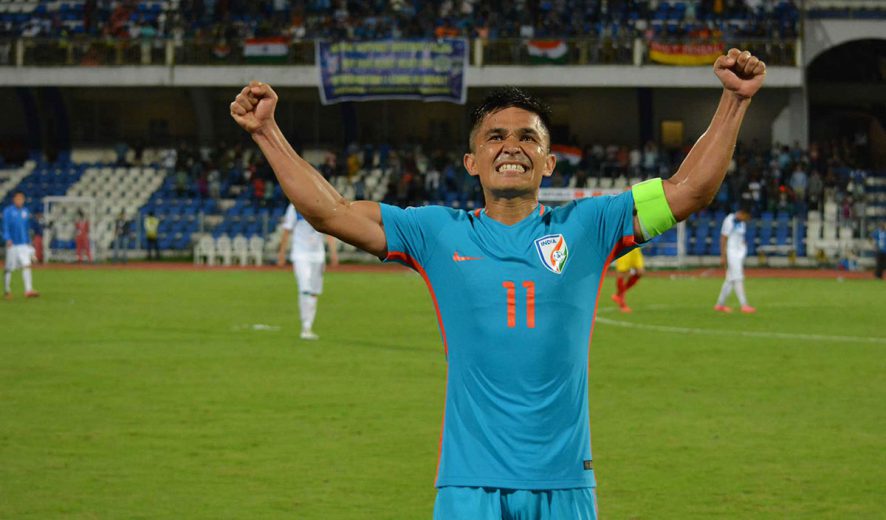 NEW DELHI, 25thJanuary,2019 : A Legend in Indian football and an Arjuna awardee (2011), Sunil Chhetri is all set to become the sixth Indian Footballer to be awarded with the Padma Shri – India’s fourth highest civilian award.

The Award was announced for his contribution to the field of sports on Friday (January 25), etching his name in the history books along with former Padma Shri awardees – the Late Gostho Paul, the Late Sailen Manna, P.K Banerjee, Chuni Goswami and Bhaichung Bhutia.

Performances for club and country has also led the Bengaluru FC forward to five AIFF Player of the Year Awards and he was recognized as an Asian icon by the Asian Football Confederation (AFC) on August 03, 2018.

In fact, it was during India’s Asian Cup match against Thailand that he overtook Argentina’s Lionel Messi, who has 65 goals.

Sunil’s attacking partner in his playing days and a legend of the sport himself, Bhaichung Bhutia said: “He has been one of the most-sincere and focussed footballers I have come across. I have seen him grow in front of my eyes for 15 years now and he has been a thorough professional all throughout.”

“What he has accomplished is a result of the sheer hard work put in. He always knew what he wanted and that’s why he was able to evolve as a player.”

Former India International Renedy Singh said: “Sunil sets the best example. He has done so well consistently over the past few years. He may not be growing younger, but most significantly, he’s not just there to support. He is there to lead by example.”

With his club, Bengaluru FC, Sunil Chhetri has won 2 Hero I-League titles, 2 Federation Cups, a Super Cup, and also led the club to a historic AFC Cup final in 2016, where Chhetri and his men lost against Iraq’s Air Force Club in the final.

Also Read: The impact of the Asian cup will be huge for Indian football, states Gurpreet Sandhu