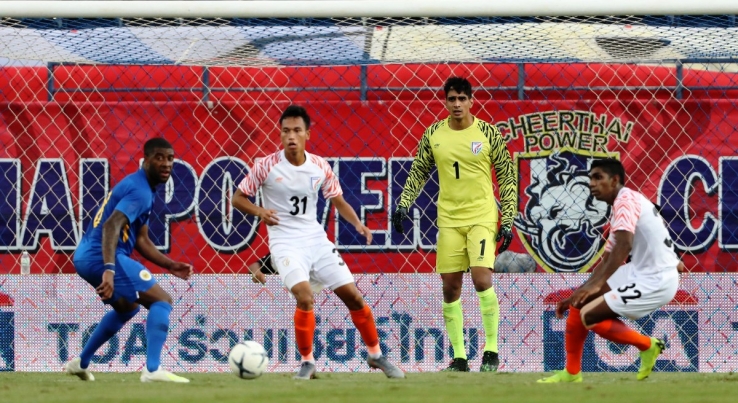 Six players made debuts during India’s opener in the Kings Cup against Curacao in what was also Head Coach Igor Stimac’s first game in-charge.

There are some moments in life that stay with you till the end of your life. And for an athlete, after years of toil and unwavering perseverance, one such moment is representing your country at the senior level for the very first time.

“I had tears in my eyes singing the national anthem,” recounted 24-year-old Brandon Fernandes, who had to wait a lot for this opportunity. “My first match for the country as a senior player. It’s a special moment in my life about which I’ve been dreaming forever.”

The midfielder for Goa was named in the starting XI by coach Stimac and after the match, he spoke about what the feat means to him, and his family. “There were a lot of times when things were difficult,” he said, before adding: “But when I finally got the news, I was delighted along with my parents and entire family. They stuck with me all these years and supported me through thick and thin. They were praying for me back home. I thank them for all they have done.”

Defender Rahul Bheke was another new face in the starting line-up and he expressed his delight at finally ‘getting to the day he was working for’. He stated: “Walking out onto the pitch with the team is the best feeling and I enjoyed every moment of it. This was the day I had been working for all these years. I’m glad my wish finally came true. Now that I have got the chance, I want to keep improving and moving towards becoming the kind of player the coach wants me to,” he expressed.

Making your debut is also about going down memory lane and looking back at the moments and people you hold dear. Midfielder Reynier Fernandes, who ame on at half-time against Curacao, paid tribute to his late father after his senior debut.

“I want to dedicate this moment to my dad. He’s not there anymore and this was the only thing that was left for him to see. I was thinking about him when I was out on the pitch and played for him,” an emotional Raynier expressed.

Talking about the taste of International football, he continued: “The feeling is amazing. The opponent was tough, and while the result was not good enough, the experience we had was amazing. We just have to look forward and keep working hard and improve. We have a number of quality opponents lined up in front of us next month as well and we have to match them.”

Another standout feature of India’s play in the match was their style of play, especially in the second half, where they looked to keep the ball and build from the back. Two players who played a key role in the display were midfielders Sahal Abdul Samad and Amarjit Singh Kiyam.

Sahal said: “Playing under this coach has been really great. We’re playing a variety of styles now — keeping the ball and passing. We look to play forward now too and build moves.” Talking about the feeling of taking his India cap, the 22-year old said that “this is just the beginning.”

“There were a few nerves at the start. It was certainly a proud moment. I feel this is just the beginning and from here, I want to keep playing for the National Team and keep improving.”

Amarjit Singh, who captained the Indian side at the FIFA U-17 World Cup India 2017, also a crucial member for the Indian Arrows in the last two seasons of the Hero I-League, expressed his delight at the kind of football the national team is aiming to play.

Talking about the moment he stated that he had “butterflies in his stomach.” He said: “As I was coming in, I was really excited. There were butterflies in my stomach. It has always been a dream to play for the Senior team and I am very happy.”

Former Chennai City FC and Jamshedpur FC man Michael Soosairaj who also made his Senior team debut revealed that playing for India was a dream he shared with his brother Michael Regin. “I want to thank my brother. I remember he used to keep telling me that you will play for India one day. I’m glad I could make our dream come true,” he maintained.

“I remember the coach suddenly asking me to warm up, go in and play aggressively. I was calm. In the first half, things did not go as planned but in the second, we were much better. The changes worked and we made attacks and had our chances.”