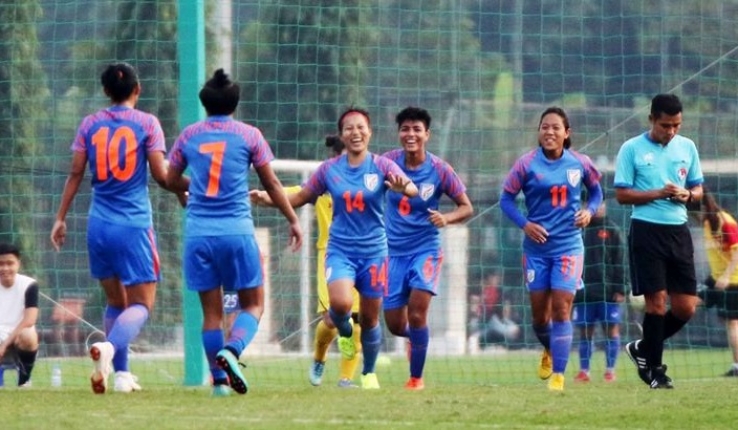 The Indian Women’s Team is high on confidence after achieving its first ever result against 34th ranked Vietnam in an International Friendly, and the players believe that such matches against strong opposition facilitates confidence in setting higher targets for the future.

Head Coach Maymol Rocky felt, “More than the result, it was a showcase for our less experienced girls to make them believe what they can actually achieve on the field.

“The way they have played against a Vietnam ranked 34th in FIFA Ranking is proof that this young batch can perform way better if they keep getting continuous chances to play against such higher-ranked teams,” she added.

India are currently ranked 58 and had a tremendous challenge on their hands after having lost the first International Friendly 0-3 in Hanoi.

“We started the game in a more compact and organized way, concentrating on cutting down their passes, and forced them to play backward, or long. This helped us to maintain possession and regulate the pace of the game. We made full use of counter attacks and that fetched us the goal. The girls played their hearts out, but Aditi (Chauhan) deserves a special mention for her performances in the last two matches,” Maymol mentioned.

Goalkeeper Aditi, meanwhile, wasn’t much willing to read into her performance, stressing, “It’s all about the team.

“We need to work on our consistency, and keep delivering this level of performance in every game. This team is capable of unbelievable things when we work as one unit,” Aditi stated.

Ranjana Chanu who scored India’s equaliser, however, could not hide her emotions. “Initially we were down by a goal. We needed to score, and that stayed on my mind all throughout. Finally, I got a chance and I knew I had to finish it off at any cost. In a football match, all that matters is to put the ball in the net,” Ranjana stated. “I felt immense joy in that moment. When I looked around, I saw my teammates rushing towards me. The joy was unexplainable.”

“The coaches, staff and players were really proud of me, which felt really good. But this moment of joy has only been achieved because we have all worked hard together as a team. I could never have scored, had it not been for my teammates,” she continued.

Since January 2019, the Indian team has played in exposure tours in the Hero Gold Cup, Indonesia, Hong Kong and Turkey, the SAFF Championship, AFC Women’s Olympic Qualifiers Round 2, COTIF Cup, and two friendlies each in Uzbekistan and Vietnam. Mention the number of matches, and mercurial striker Bala Devi smiles.

“We are playing more confidently and we are getting more exposure than before. So at the moment, we are not scared of any level of opposition,” Bala maintained. “Vietnam were very organised and they knew how to defend. It’s one of the better defences that we have played so we are happy to have earned this result.”

Captain Ashalata Devi, commended the team on the performance, stating “beautiful teamwork” helped achieve a draw against Vietnam. “They were technically very good. They had a lot of off-the-ball movement. So it was a different challenge for us. We’ve not played any opponent similar to their style of play,” said Ashalata.

“It was challenging to stop them. But we managed it pretty well with zonal marking. Communication is key in such situations and that really helped us to organise ourselves,” she added.