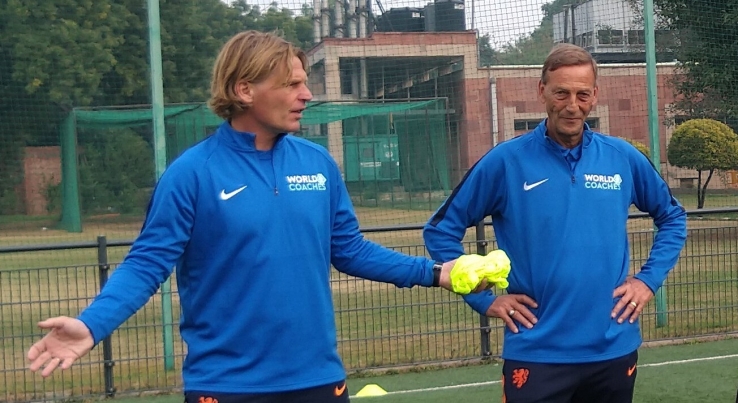 The city of New Delhi was graced by the presence of former Netherlands legend Johan Neeskens, who was in the capital on Friday (December 13, 2019) to train a number of coaches at the Jawaharlal Nehru Stadium as part of an exchange between the All India Football Federation (AIFF) and the KNVB (Netherlands Football Federation).

The 68-year-old, who is instructing 21 coaches in New Delhi, was impressed with how receptive the trainers were to the new techniques. However, he felt that the sheer size of India’s population means that there is much more potential to make major breakthroughs in the beautiful game.

“This group of coaches has learnt a lot and improved much over these few days. That shows that the potential is very much there in this country,” Neeskens said to The-Aiff.com. “The population of 1.3 billion is huge, but it is the case of building a pyramid.

“You start from a young age with a wide range of players, and only then can you get better at the top. Chhetri is a great player. But we cannot fixate on him now. This is the time to think about the kids who are starting to play football. Then you can see football improve,” he further said.

Former FC Groningen striker Bert Zuurman, who has come to New Delhi along with Neeskens, stressed on the importance of having a vision of how to take the game forward.

“Its important to have a vision, and we are here to share KNVB’s vision with the rest of the world. The good thing is that we have a lot of coaches who are sharing this vision. That makes it a very strong case for taking that footballing vision forward,” said Zuurman.

“Netherlands is always among the top countries in the FIFA Rankings. That happens because we are always educating our coaches and players about the game. With the spread of that knowledge, countries like India could also improve,” he further continued.

Zuurman further went on to state that the coaches in India take care to look into both the footballing and social aspects of the players. “What I’ve liked a lot about how the coaches here in India operate is that they don’t just look at the footballing aspects. They also look at the social aspects of the kids who are training under them,” he said.

Neeskens, who was a part of the legendary Netherlands team that finished runners-up in the 1974 and 1978 World Cups, believes that kids in India should start playing the game from a much younger age.

“It all comes down to how experienced a player is. Even at the age of 10-12, I believe that a player should have already had around five years of good coaching behind him. Then you can try out complicated routines which they can execute,” he said.

“Then you can see that experience even in a 13-year-old’s game. In the pass, receiving, in their movement – you can see that they have had the proper footballing education. They can visualise five passes, where the others will only see two,” he continued.

He further went on to draw the examples of countries like USA, Korea Republic and Japan, where the beautiful game has grown manifold.

“Look at USA. Football was nothing over there in the 1970s. but they started at the very base level, and that is why they have improved. They have a decent men’s team, and they have the best women’s team in the world. Japan, Korea and China have also followed the same model. When you start down there and then move forward, the future will be bright for India,” Neeskens rounded off.