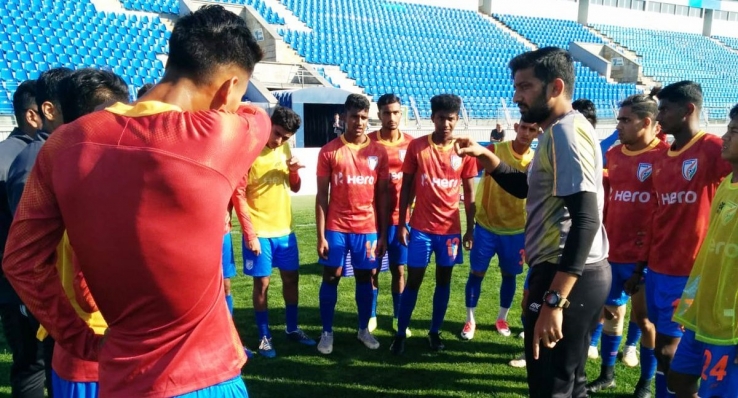 Having lost the opening encounter against hosts Russia 0-3, the India U19 National Team didn’t kick-off their Granatkin Memorial Tournament campaign in a positive way.

One day before hitting the pitch against Moldova, who shared the spoils with Bulgaria in the other encounter of Group A, India coach Floyd Pinto shared their plans, recovery and many more.

Was there a bit of lapse of concentration among the players in the second half?

This was the first game these boys played together. They adapted well to the situation, we defended well in the first half. Yes, there were a few lapses of concentration in the rush of blood and we gave Russia an opening which they capitalized on. Now, we know that we need to put up a better defensive display and hopefully keep a clean sheet against Moldova.

How do you assess Moldova from their first match against Bulgaria?

Bulgaria and Moldova are very respectable sides. The intensity of their game, the standard of their football is very high. Technically as well as tactically, they played as a complete unit. As far as the equation of the group is concerned, we will only have a clear picture once we play Moldova tomorrow and we can contemplate where we’d probably finish. After this match, we can prepare ourselves for the Bulgaria game and the playoffs.

How do you review the boys’ performance against Russia?

Honestly speaking, we are not happy about our performance last night. We can surely work on how we keep more possession. We need to be more confident on the ball and work more proactively when we have the possession. On the other hand, we need to string a few passes together to create more chances. We’ll look forward to structure our movements well and execute our plans that we have done in training.

Are you contemplating any change against Moldova?

Honestly speaking, we can’t comment on this now. According to our plan, we will look to give as much game time as possible to all of the 18 players. We need to give all of the players who played in the first match as much time as possible to recover so that we can evaluate them on the morrow. Touch-wood, we have no injury scare from last game and everyone is available tomorrow.

Kings Cup: India go down 1-3 to Curacao, to face Thailand for the 3rd place play-off
Poinsur Gymkhana to conduct trials for their MDFA 2nd Division Campaign