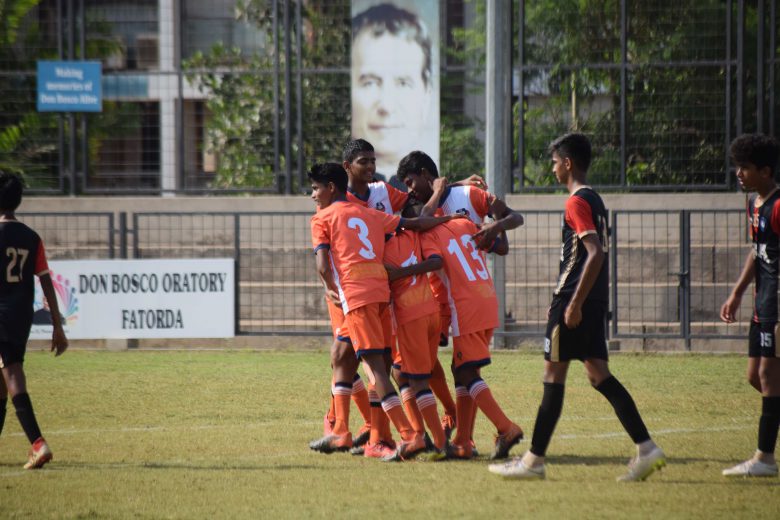 FC Goa defeated Mumbai’s Youth Soccer Academy 2-1 at the Don Bosco Ground in Fatorday today to record their first win in the final round of the Hero Sub Junior League.

~ Young Gaurs notch up their first win of the final round ~

Two goals on either side of halftime from Dadapir Adoor and Ivo Costa respectively helped the young Gaurs to all three points.

The youngsters in orange dominated the proceedings from the get and could have gone in front in the 14th minute of the game when Reezvon Fernandes made a blistering run down the right. His cross was met by Velrose Dias in the middle, but his contact was not a desired one and the effort was cleared off the line.

The persistent pressure finally paid off in the 23rd minute of the game when Dadapir Adoor was able to head home at the far post after an initial corner was not cleared properly.

Reezvon was again at the centre of attention when he was able to swivel past his defenders early on in the second half before his shot came off the crossbar to the relief of the YSA boys. The young Gaurs, though, didn’t have to wait long for the second. A well-taken free kick by Dadapir was deflected in by Ivo to help FC Goa double the lead in the 42nd  minute of the game.

The YSA boys came on strong late in the game with Dhruv Prabhakar Yogeshwar scoring in the 58th minute to make it interesting. The youngsters in orange, however, held on to snatch all three points.

The win takes them to second place in Group D of the Final Round. They will next play FC Madras on 18th May at Navelim, as they look to book their place in the quarter-finals. The game is scheduled for a 4 pm kickoff.