Hero Sub-Junior Championship: RFYC win title with a convincing 3-0 win over Bengaluru FC in the final 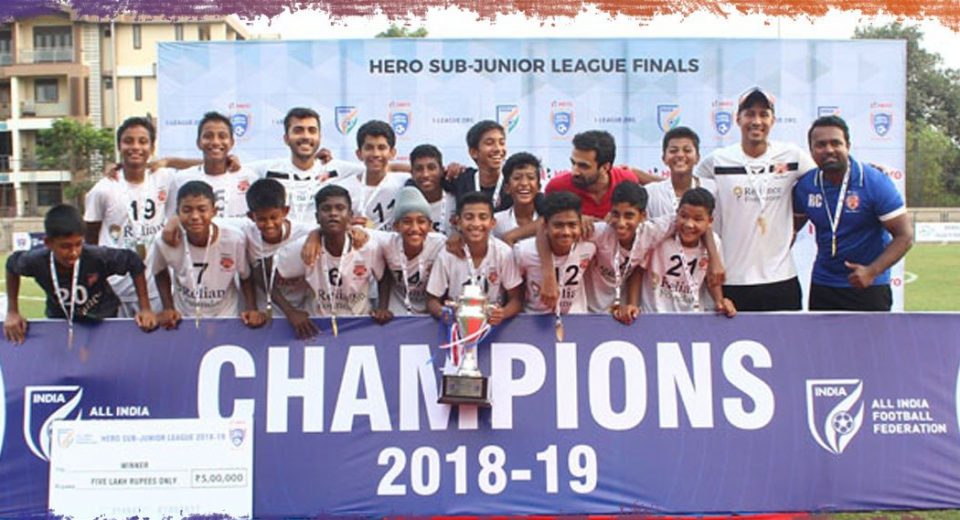 Reliance Foundation Young Champs (RFYC) were crowned the Hero Sub-Junior League 2018-19 champions at the Don Bosco College Ground in Margao, Goa on Wednesday when they defeated Bengaluru FC 3-0 in the final.

Prantik Saha and Supratim Das scored in the first half for the Mumbai-based side, while Harsh Vaghela added a third in the 57th minute to secure the win.

The first half began with RFYC starting off on the brighter note as Bengaluru FC goalkeeper Priyansh Dubey was forced to make a couple of quick saves in the first ten minutes. He was forced into action once again in the 21st minute by Karthick Thirumalai, who cut in from the left to shoot, but Priyansh was alert and collected the effort.

Five minutes later though, he had no chance as RFYC took the lead thanks to a brilliant shot from left-winger Prantik Saha. Collecting a cross from the right, Prantik beat his marker and curled in a shot into the far corner to put his side into the lead.

Bengaluru responded through Ishaan Raghunanda minutes after conceding but the youngster’s shot from the right side went into the side netting. In the 31st minute, RFYC doubled their lead through midfielder Supratim Das. A cross from the right was punched out by the Bengaluru keeper but Supratim showed supreme awareness and from 25 yards, he lobbed over the goalie to ensure his team went into the break with a 2-0 lead.

The first attack of the second half saw RFYC’s Harsh Vaghela race past the defence, rounding the keeper and tap the ball home, but the effort was ruled out for offside by the referee. Bengaluru then regrouped and tried to make their way back into the match but were unlucky to have not scored their first goal of the game in the 39th minute. Bengaluru skipper Gautam Rajesh struck a powerful free-kick from the edge of the penalty area, but it came back off the underside of the crossbar.

Midway through the second half, Bengaluru had another chance to score through Chandan Biju but the winger’s header from a set-piece opportunity fell straight to the RFYC keeper Aniket Ghosh.

The Blues continued to press to halve the deficit and were caught on the break by RFYC in the 57th minute as Harsh registered the third goal for his team. The speedy forward made his way past the two Bengaluru defenders and made no mistake in the one-on-one situation as he slammed the ball home powerfully and secured the victory for RFYC.

Also Read: The odd journey on a road less taken – a football story

The real challenge for me begins now: Brandon Fernandes
Iron Born FC to conduct trials for their youth teams