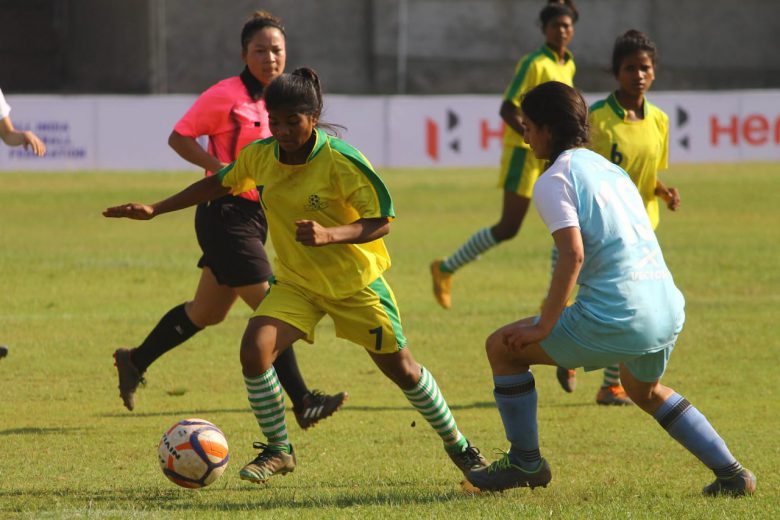 Results of other group matches:

The first encounter of the day saw Jharkhand rack up a comprehensive victory over Jammu and Kashmir at the Rajarshi Shahu Stadium, with the score line reading 21-0. Forward Sumati Kumari notched up five goals in the game, while Captain Astam Oraon along with substitutes Anu Radha Kumari and Priya Kumari all picked up a hat-trick apiece. Salina Kumari, Amisha Baxla, Kuwari Indwar all contributed with braces while Santoshi kumara scored the remaining one goal before being replaced by Priya Kumari to complete the 21-0 rout.

At the Polo Ground meanwhile, defending champions Tamil Nadu began their campaign with a comfortable 5-0 win over Madhya Pradesh. M Saritha opened the scoring for her side in the 21st minute and added a second just before half-time, with Mariyammal B recording a second-half brace and Priyadharshini S finding the net four minutes from time.

Three time champions Manipur started off their campaign with a 4-0 thumping win over Uttarakhand. S Lynda Kom opened the scoring in the 20th minute after which UttaraKhand showed some resilence in defence however, T Kritina Devi doubled the advantage in the 62nd minute before N Priyangka Devi and H Shilky Devi converted their chances to wrap up the game 4-0.

Meanwhile joining Manipur at the top of the table will be Goa, who recorded a 3-1 win over Tripura. Striker Karen Estrocio got all three goals for the Goan team while Anjali Debbarma scored a consolation in the 89th minute.

In one of the two group D encounters, West Bengal picked up three points with a 1-0 win over Arunachal Pradesh courtesy of Arunabag’s 15th minute goal.

Meanwhile in the other Group D game, Haryana started off their campaign with a 9-0 win over Karnataka, with Rajni Bala scoring four goals and captain Raveena finding the back of the net thrice while Kamna and Ritu chipped in with a goal apiece.

Gurpreet Singh Sandhu: It’s more about having that sporting culture in our country
Air India responds with a 3-0 win over GMSC