The winning goal was netted by the substitute Park Hyon II on the 71st minute of the match. The solitary goal turned out to be the deciding factor of the final.

DPR Korea had a promising start to the game. They created several goal-scoring opportunities. Throughout the game, DPR Korea was comprehensively the dominant side. Tajikistan had a chance to equalize after being down by a goal. But eventually, they failed and the men in form clinched the title. 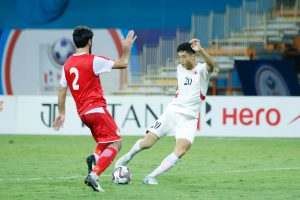 Ironically, both the finalists were the two lowest-ranked teams amongst the four participants. Hosts India and Syria were knocked out of the tournament during the league stages.

DPR Korea skipper, Jong II Gwan was rewarded the Hero of the tournament for his three-goal spree and his assist in the final. He received a sum of USD 7500.  The champions DPR Korea got rewarded with USD 50000, and the runners Tajikistan were awarded USD 25000.