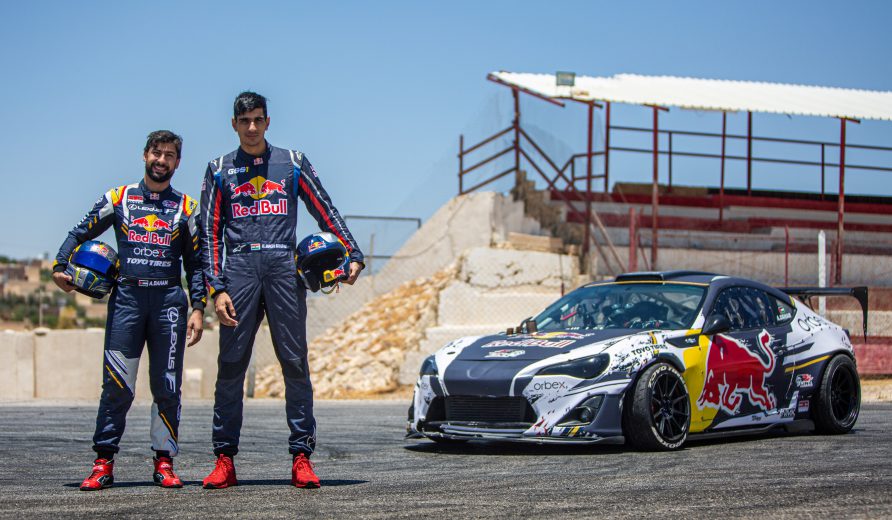 If ever there was a country that perfectly aligned with stunning backdrops for driving and drifting, it has to be Jordan, and the Mars-like landscape of Wadi Rum in particular. A maze of monolithic rockscapes rises from the desert floor to heights of 1,750m creating a natural backdrop for the video captured during the Red Bull drifting shoot in Jordan recently. This exciting project was a  collaboration between Red Bull and the Jordan Tourism Board.

The video and stills of the entire drifting experience in Jordan starred trailblazer Indian footballer and the goalkeeper of the Indian national football team Gurpreet Singh Sandhu. The goalkeeper of Bengaluru FC in the India Super League, and also a Red Bull athlete, Sandhu is the first Indian to play a competitive match for a top-division team in the UEFA Europa League when he represented Norwegian side Stabaek FC in 2016.

Gurpreet recently travelled to visit the natural wonders of Jordan including the Dead Sea and Petra. At over 400m (1,312 ft) below sea level, the Dead Sea is the lowest point on earth where you can float without sinking. Petra, known as the ‘rose red city’ is a world wonder, and without a doubt Jordan’s most valuable treasure and greatest tourist attraction. It is a vast, unique city, carved into the sheer rock face by the Nabataeans, with the treasury or the ‘Khazneh’ being the most visually stunning. The entrance to the city of Petra is through the Siq, a narrow gorge, over 1km in length, which is flanked on either side by soaring, 80m high cliffs. As you reach the end of the Siq, you will catch your first glimpse of Al-Khazneh (treasury). It is an awe-inspiring experience to see the massive façade, 30m wide and 43m high, carved out of the sheer, dusky pink rock-face and dwarfing everything around it. It was carved in the early 1st century as the tomb of an important Nabataean king and represented the engineering genius of these ancient people. Sandhu visited both these major tourist attractions in Jordan while he was filming.

Sandhu was in Jordan to learn how to drift from the drifting star of the Middle East and Red Bull athlete Ahmad Daham. Winner of multiple Red Bull Car Park Drift championships, Daham has been crowned King of the Desert twice, and he is the Guinness World Record holder for the longest twin drift. In addition to holding the Guinness World Record for the longest twin drift, Daham stacked up a series of big wins. He followed up his 2014 Jordan Drift Championship by winning the Red Bull Car Park Drift championship that same year, repeating the feat in 2015. In 2016, he was crowned King of the Desert in the annual King of Desert series – a title he retained in 2017. A favourite saying of his is “sideways is the new way forward”! With a huge fan base all around the Middle East, he always takes the time to talk to his fans, giving them advice on tuning and driving.

Drift racing is one of the fasting growing motorsports in the Middle East. Pioneered by Japanese street racers in the 1970s, it evolved into a mainstream international sport in the early 2000s. In recent years it has gained popularity, particularly across Jordan.

In drift racing, instead of driving straight like in conventional racing, the car is steered sideways to lose traction on the wheels intentionally. With prolonged skidding and a rapid build-up of friction, the tyres of drift cars are burnt through within a few minutes.

At the Madaba Circuit in Amman, Jordan, Sandhu went through a thrilling experience of learning from Daham how to do donuts, a figure of eight and drift around a corner on the track in a 700 horsepower car.

Sandhu also hitched a ride with Daham for an experience of a lifetime when they both drifted through locations like Namala Road, Wadi Rum, before Sandhu was dropped off at the Dead Sea.

Also Read: Mandar Rao Desai – “For me, it was a new challenge to play at left back.”

Also Read: NorthEast United: Football is not just a game, it’s a religion in the 8 states!

Mandar Rao Desai – “For me, it was a new challenge to play at left back.”
ATK building a legacy with focus on youth