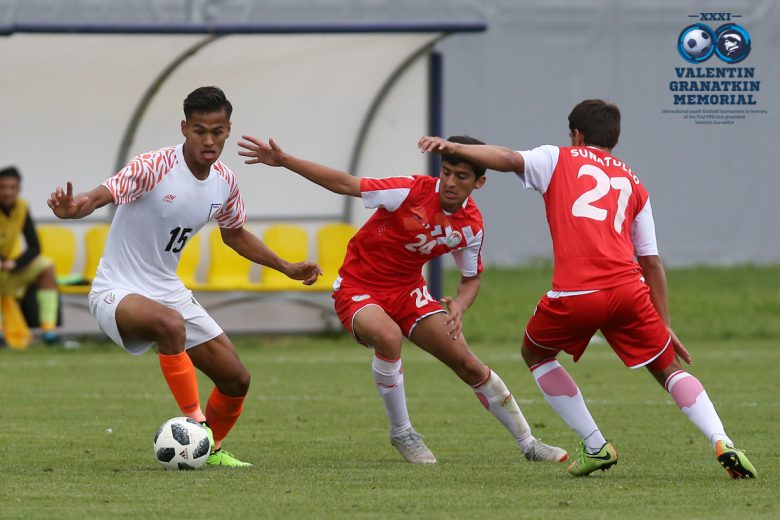 The India U19 National Team fell short against Tajikistan in the 11-12th play-off decider of the Granatkin Memorial Tournament at the Turbostroitel Stadium on Thursday.

Tajik midfielder Panzhiev Ozodbek’s stellar finish in the 40th minute was enough to confirm their win against their Indian counterpart in what was their final show in the thirty-first edition of the tournament.

Coach Floyd Pinto, who was forced to make some changes in the starting line-up owing to the prolonged injury of Ninthoi and Vikram brought in Jitendra Singh in the defence as well as gave Sailo Lalchhinhima his first start of the competition.

Akash Mishra, who had already scored a couple of goals in the ongoing tournament, made a blistering run down the left flank, but his cross wasn’t put to use by Givson, who was operating as a floater in the middle of the park.

Tajikistan earned their first corner in the 14th minute but the feeble shot was collected by skipper Prabbhsukhan Gill. Two minutes later, Kamolov Amadoni unleashed a right-footed volley from long-range but it went haywire. Rohit Danu was operating from the left and tried to penetrate the Tajikistan defence, but was thwarted by Sharipov Jonibek more than once in the first half.

On a counter-attacking move, Tajikistan broke the deadlock in the 40th minute as Panzheiv Ozodbek blasted the back of the net from a curling right-footer from the top of the box. Gill had no answer to the fabulous shot, as Tajikistan went 1-0 up.

Tajikistan maintained the slender lead to head into the changing room at the end of the first half. Two minutes after the resumption, Tajikistan could have doubled the lead but Akash’s exquisite goalline clearance left them aghast. As Gill tried to punch the long corner away, it fell to Elmurodov Shuhrat, who produced a deft effort that was cleared by Akash to keep the scoreline unchanged.

Danu showed more intent in the second half but his low cross for Jeakson, who could have exploited it, but the defensive midfielder failed to gain control of the ball, with around 30 minutes of regulation time left.

Gill came out with some heroic saves in the last ten minutes to deny the Red outfit from extending their lead and eventually, Tajikistan held on to their 1-0 lead until the final whistle to seal their first win of the competition.

U Mumba FC announce trials for upcoming season
When Gurpreet Singh Sandhu and co. got in a ‘Not-So-Mexican’ Stand-off