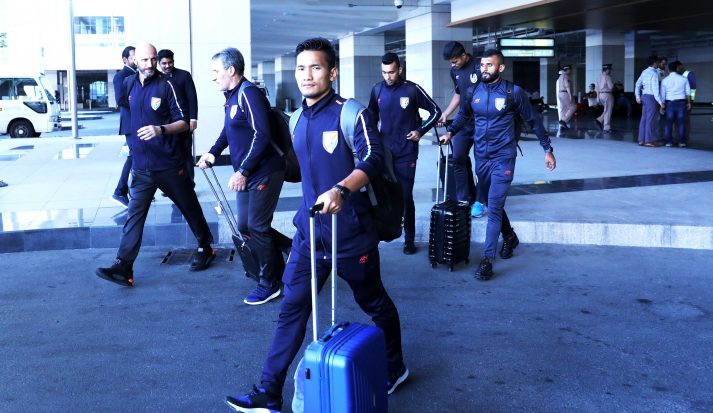 In the search of their first win in the FIFA World Cup Qatar 2022 qualifiers, the Blue Tigers reached Muscat today (Sunday, November 17, 2019). The average temperature is expected to be around 25-degree Celsius in comparison to 10 degrees in Dushanbe where India played Afghanistan.

Two back-to-back away fixtures have always been challenging that too in different climatic conditions as well as different turfs. But the team has responded well so far, and coach Stimac feels “acclimatising to Muscat conditions is our top priority right now.”

“We have reached Muscat today. We have had a night stay in Dubai and it helped the players get a good rest,” Stimac continued, “We will have a training session in Muscat today evening to fine-tune our preparation before taking on Oman. We know how tough the game will be. So we have to make sure all players stay fit and deliver maximum on 19th.”

The match is set to be held at the Sultan Qaboos Sports Complex in the capital city of the Gulf nation on Tuesday (November 19, 2019). The kick-off is at 8.30pm IST.

Moreover, he added further that the players are “physically very fit” and they’re not a unit who are “suffering cramps” on the pitch.

Stimac referred: “We are physically very fit and the players are not getting bogged down on the pitch or suffering cramps. Conditionally, we’re doing well too. The recovery has been taken care of as per the plan, and that’s the reason players have adapted to different weather conditions naturally.”

In the first leg, Oman edged past the Blue Tigers when they faced off in Guwahati on September 5, 2019. In what was skipper Sunil Chhetri’s 112th appearance for the country, he had given gave the Blue Tigers an early lead to register his 72nd goal for India.

But, Al Mandhar smacked a late brace in last 10 minutes of regulation time to swing the tie in Oman’s favour in front of a 22,000-odd strong Indian support in Guwahati.

Stimac didn’t mince his words to show his respect for Oman, and labelled them as one of the “favourites in group.” He further mentioned that Indians are improving gradually and the numbers corroborate the same.

“Qatar and Oman are two favourites in our group. The difference between the other three (Afghanistan, Bangladesh and India) is very less. Against Afghanistan my team performed in the second half. This is a team for the future and we are in the process of becoming a tough team to play against. We had created chances to win every match until now. We even created chances against Qatar in the last minutes. We’re improving gradually and that’s what makes me proud.”

“We are a unit that passes the ball confidently but we have to keep in mind that we are making too many mistakes and giving away possession. We have to work further on this,” the Croatian coach showed his concern.

Sunil Chhetri also reiterated the same. “We have to make sure we stay disciplined and play as a tough unit who anyone wouldn’t want to play against. It’s a massive game in the World Cup Qualifiers where we need to gain points from.”