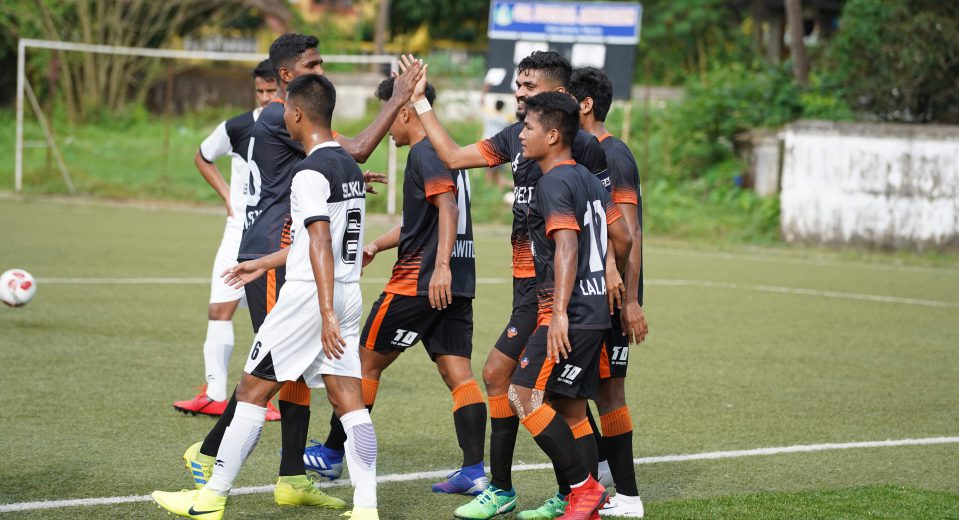 Goa, October 9, 2019: The FC Goa Developmental team eased to a 3-0 victory over Corps of Signals in their second Goa Pro League match at the Duler Stadium, Mapusa on Wednesday. Opi, Leander D’Cunha and Aaren D’Silva netted for the young Gaurs.

The match started with Opi and Tlunga up front, flanked by Kapil Hoble and Flan Gomes. Brian Faria and Papuia played at the heart of defence, with Ivon Costa and Leander at their left and right respectively.

Signals soon found themselves at a disadvantage as Opi, through on goal, was brought down by keeper Vikramjit Singh. The Signals custodian was shown a clear red in the 9th minute as a penalty was awarded to the Developmental team.

Opi, having won the penalty, stepped up to rifle it into the top corner beyond replacement keeper Binu Purushothaman. The Dev Team doubled their lead in the 16th minute when a free-kick found its way to the feet of Flan, who set up Leander for an easy tap-in.

The half ended 2-0 as the Dev Team held a comfortable lead at the break. Aaren and Nestor Dias were substituted in place of Opi and Hayden Fernandes. Super sub Aaren made it three when he adroitly finished Flan’s low pass into the box.

The winning team made their third and final change as Vincy Barretto came on in the place of Tlunga. The defence held firm as the Dev team kept a clean sheet. FC Goa’s first match was abandoned as scheduled opponents Panjim Footballers did not register sufficient players for the match.

Also Read: SAFF U-15 Women’s Championship: India are set to take on Nepal in tournament opener