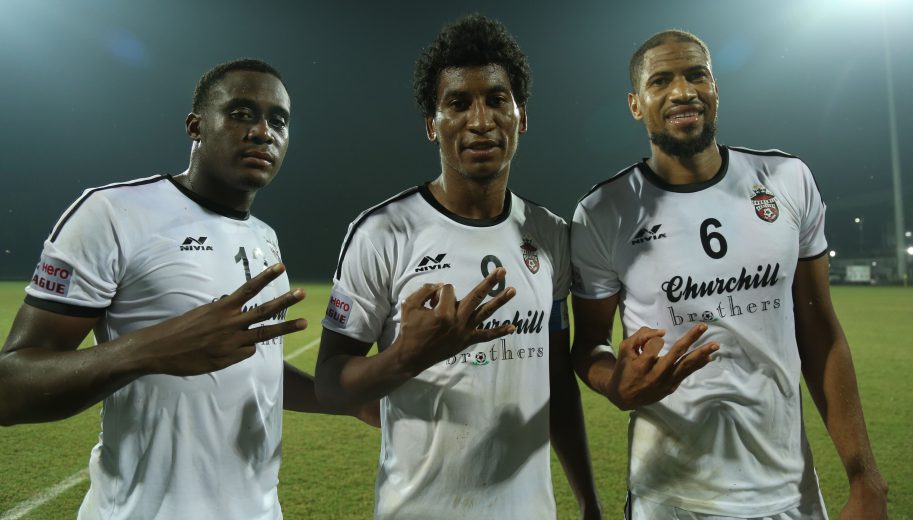 Willis Plaza (2′, 38′) and Robert Primus (29′) did the damage in the first-half before Radanfah Abu Bakr (76′) put the match to bed. For the Mariners, Fran Gonzalez (34′) converted from the 12-yard penalty spot and Subha Ghosh (90′) blasted the back of the net from close in the dying minutes but they couldn’t deter the inevitable.

Mohun Bagan started with one change with Ashutosh Mehta starting for the first time this season. Churchill Brothers FC Goa fielded an unchanged eleven that defeated Punjab FC in their season opener.

The first half began with the visitors taking charge right from the first minute. Churchill’s efforts yielded immediate result as the visitors took an early lead in the 2nd minute itself when their talismanic leader Willis Deon Plaza made no mistake in finding the back of the net through a well-calculated cross from Gambian Dawda Ceesay.

The hosts were left baffled with this early strike and looked helpless trying to defend a series of attacks from Churchill Brothers FC Goa thereafter. Mohun Bagan, however, tried coming back from the early damage but a failed effort from PM Britto to tip the ball over Churchill’s Jaffar in the 8th minute saw the hosts long for an equaliser get longer.

Mohun Bagan slowly organised themselves increasing the pace of their game but lack of creativity in the final third eluded them from scoring. The Spanish duo of Colinas and Beitia, with due support from Naorem and Britto, did create trouble for the Churchill defenders but their efforts to score were foiled by the Churchill defenders.

Against the run of the play, the Red Machines doubled their lead in the 29thminute when a perfect corner shot from Dawda Ceesay saw Robert Junior Primus finding the back of the net from a well-directed header.

The Mariners’ efforts, soon, earned result when an individual effort from Naorem inside the Churchill Box helped the hosts earn a penalty in the 33rd minute. Thereafter, Spaniard Javier Gonzalez slotted it calmly and the match sprung to life in no time.

Churchill, who are known for their attacking play, left no chance to capitalise on their lead and further increased the lead to 3-1 in the 38thminute through a Willis Plaza screamer from outside of the box which caught Mariners goalkeeper Debjit napping. Debjit fumbled while gloving the ball and allowed it to roll into the goal.

The first half came to an end with the scoreline reading 3-1 to the favour of Churchill Brothers FC Goa.

Mohun Bagan started their second half on an attacking note and rightfully, earned a few open chances as well, but nervous attack and lack of a poacher inside the box saw the hosts unable to reduce the two-goal deficit.

Mohun Bagan, relentlessly, kept on attacking but their vulnerable setpiece conversions saw them on the losing end. In the 76th minute, Israil Gurung, who came off the bench, floated a long ball from the right flank and Abu Bakr leapt over his marker to score his first goal this Hero I-League season.

A shattered Mohun Bagan thereafter kept making mistakes in the midfield, however, even Churchill’s defence was caught off guard by youngster super-sub Shubha Ghosh in the dying moments of the game.

The young striker who replaced Naorem, converted a pass from Colinas to earn some respite for the hosts and much-needed confidence for himself. Mohun Bagan, thereafter, made a few efforts to score but Salvador Martinez squandered those opportunities. In the final minutes of the injury time, a stunning strike from Beitia was beautifully parried away by Churchill’s substitute goalkeeper James Keithan to see the game end in Churchill Brothers FC Goa’s favour with the scoreline reading 4-2.

Churchill Brothers FC Goa, with six points from two games, now sit affirm at the top of the Hero I-League points table followed by Gokulam Kerala FC, separated by goal difference. Willis Plaza with two goals in the game was adjudged as the Hero of the match.