ATK climb on top of the table 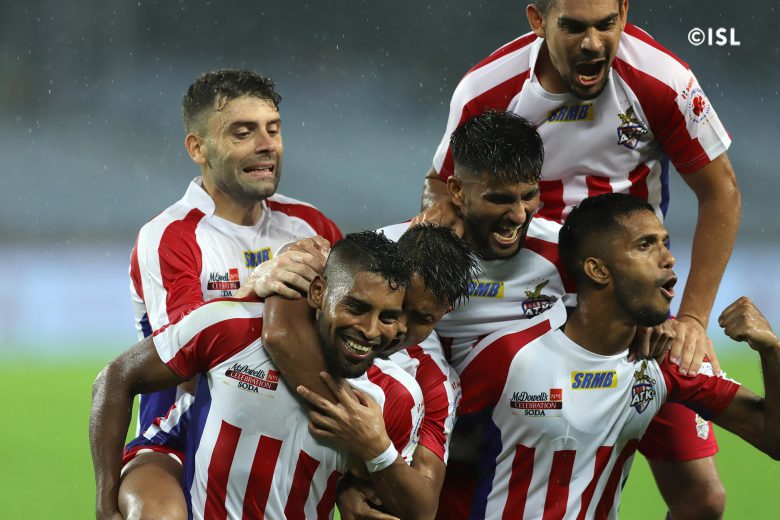 Roy Krishna excelled for ATK as they handed Jamshedpur FC their first defeat after a 3-1 result at the Vivekananda Yuba Bharati Krirangan here on Saturday.

After a barren first half amid pouring rain in Kolkata, ATK surged to a 2-0 lead through two penalties, both converted by star striker Roy Krishna (57’, 71’). Though another penalty in the 85th minute saw Sergio Castel pull a goal back for Jamshedpur FC, the hosts sealed their third consecutive victory after Edu Garcia (90+1’) scored a late third.

The win sees ATK surge to the top of the standings with nine points from four games while Jamshedpur remain fourth with seven points on the Hero Indian Super League ladder.

The match got off to a lively start amid wet conditions in Kolkata and it was the away side who had the first real chance. Eight minutes into the game, Piti outfoxed Jayesh Rane on the left wing before finding Farukh Chowdhury with a cross. But the Indian forward’s header clattered back off the crossbar.

The tempo of the match slowed down after the first 10 minutes as Jamshedpur strangled ATK in midfield. But ATK continued to dominate the match with Michael Soosairaj troubling the Jamshedpur defence with some skillful dribbling and runs. However, the final delivery let him and his teammates down.

As a tightly-contested half wound down, David Williams created a couple of chances for ATK. In the 40th minute, he robbed Memo before playing Rane in with a brilliant backheel. But Rane’s shot was saved. Immediately afterward, Williams set Rane up again, but this time the latter’s shot missed the target by inches.

The second half saw ATK continue their dominance on the proceedings with Soosairaj, Krishna and Williams continuing to pose questions for the Jamshedpur defence.

Their efforts were rewarded 10 minutes into the half when Krishna embarked on a strong run through the middle, brushing away a couple of Jamshedpur players with ease. However, he was brought down by Tiri inside the box and the referee promptly pointed to the spot. The Fijian forward duly converted the spotkick, sending Subrata Paul the wrong way.

Krishna continued to be a thorn in Jamshedpur’s side with his strong runs and determined pressing. He won another penalty for ATK in the 70th minute when he received a lobbed ball, rode Tiri’s tackle and entered the box, only for Memo to bring him down. The forward made no mistake from the spot yet again as ATK doubled their lead.

But just as it seemed ATK were cruising towards a victory, Jamshedpur won a penalty. In the 85th minute, Noe Acosta went down under a rough challenge from Anas Edathodika during a corner routine, forcing the referee to award a spotkick. Sergio Castel promptly made it 2-1 to set up a grandstand finish.

ATK capitalised on the space left behind their opponents in injury time. Williams found Krishna on the break with a lovely cross-field pass. The Fijian sent Garcia through on goal with a first-time touch and the Spaniard chipped the ball into the back of the net to seal the victory.