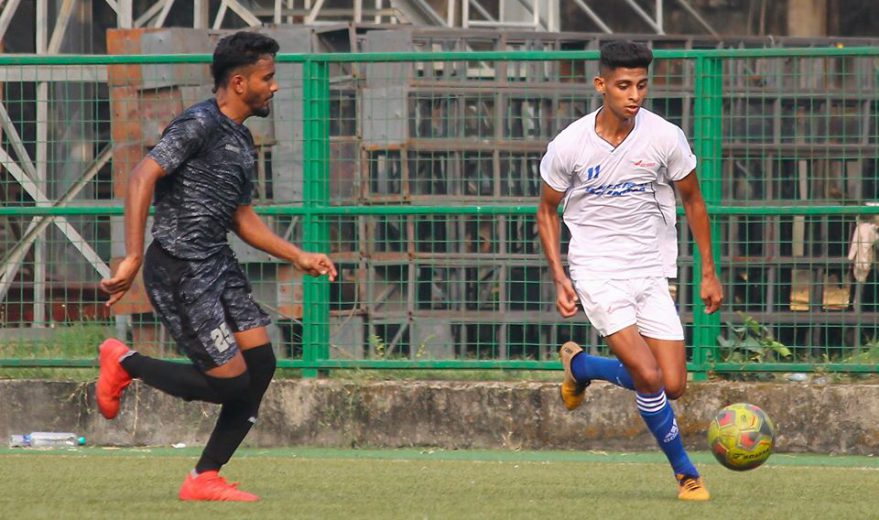 With a player down and a goal down at the break, Air India rallied back brilliantly to hold HDFC to a draw in the MDFA Elite Division encounter (Corporate) played out here at Cooperage Stadium on Sunday.

Air India’s Suraj Negi struck a 2nd half header to cancel out Pragnesh Solanki’s early goal for HDFC as the both sides ended the game 1-1.

The game began with HDFC dominating the early proceeding. The bankers almost immediately went into the lead when Titus Uttankar beat his marker to send in a low cross for a tap-in only for an onrushing Aditya Dalvi missing it by whisker. However in the seventh minute, HDFC eventually took the lead after another good work from Titus who dribbled past a player to send in a neat through ball for Pragnesh Solanki, who ran into the box with the ball before slotting it past the keeper.

Air India immediately responded with couple of their own attacks. Dion Menezes freekick hit the woodwork after Sanchit Bhatt was fouled just outside the box. Few minutes later another freekick opportunity saw Satish Singh hitting just wide of the post.

Referees had a field day at the office with as many as 9 yellow cards being shown one of which turned into a Red. A reckless tackle from Air India’s Jiten Koli on Aaditya Dalvi earned him the first Yellow from the referee. Around the end of first half, Koli was booked for the 2nd time in the day for an elbow on Niyaz Patel. By the end of first half, Air India were trailing by a goal and to mount more misery were down to ten men too.

In the 2nd half, Air India shifted to 3-5-1 formation to control the midfield allowing themselves to intensify their attack. Few silly errors from referees heated up the match and yellow cards for dissent and rash fouls came flying out of the pockets. A dubious corner decision for Air India hurt HDFC the most as the corner ended up in goal. In the 56th minute, Azza Noorani’s corner-kick was well headed home by Suraj Negi to bring back the scores on level terms.

As the momentum shifted towards Air India a routine corner resulted in ball being handled by Prashant Rane as the referee pointed to the spot. However Vijith Shetty’s spot kick hit the bar as the former champions missed the opportunity to take the lead.

In the dying stages of the match, HDFC had a chance to go a goal up in a counter-attacking move only to be denied by Air India custodian Jo Paul Bence. At the other end, a powerful shot from Vijith brought out a flying save from HDFC keeper. The game ended at the score 1-1 as both sides shared the spoils.

On 31st July 1948, almost one year after gaining Independence, India played its first ever International football match against France at the world’s biggest sporting event – Olympics. The 1948…