We deserved the trophy: India U15 Girls Coach Firmin 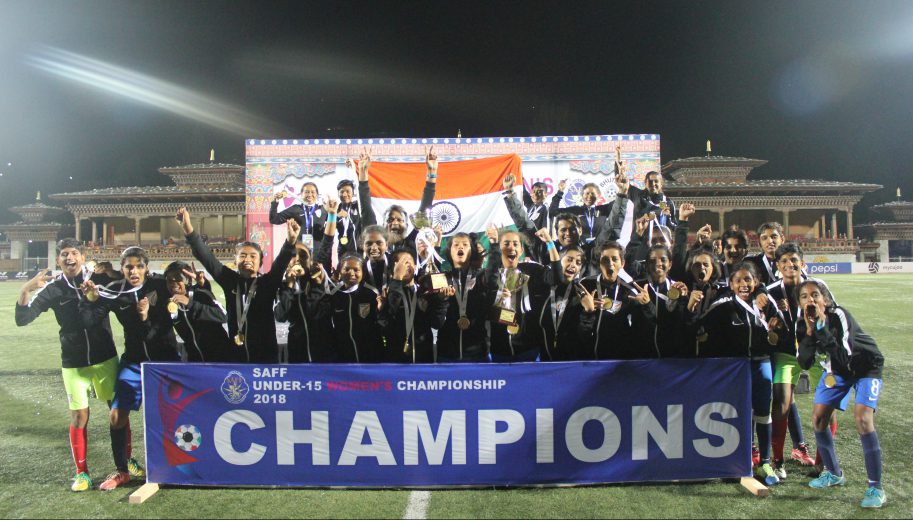 Moments after India were crowned champions in the SAFF U-15 Girls Championship by defeating Bangladesh by a solitary goal in the final in Thimpu, D’Souza stated: “We stuck to our task. There were targets for each player and everyone executed it to perfection. I am extremely proud of the girls.”

“Right from day one when we assembled in the Camp we have worked hard. Hard work leads to success and we fully deserve this,” he added.  “It’s hard to express how happy I am to get this trophy back home.”

The legendary Bembem Devi, presently the Assistant Coach of the team couldn’t stop smiling after the final whistle. “As a player I have been fortunate enough to win medals for my Country. But to win it in my first International Coaching assignment is perhaps more satisfying. The maturity of this U-15 girls, both on and field the field is so inspiring,” she maintained. “They are a very disciplined unit.”

Goalscorer Sunita Munda mentioned it’s a ‘very happy feeling’. “I can’t ever describe this moment. We are champions, India are the champions,” she had tears in her eyes. “We had promised that we would be backing each other and fight for our Country,” she uttered in one breath. “The tournament has been an eye-opener for all of us. We want to better ourselves in the future.”

Forward Shilkhy Devi added ‘everyone played well’. “We are very proud to have won this for our Country. This is a feeling which I can’t describe,” she uttered. Midfielder Avika Singh attributed the triumph to “team spirit.”

“We gave our 100 percent on the field. It was a very tough match and it’s so satisfying to have emerged champions. Jai Hind,” she stated.

SAFF U15 Championship: India U15 girls crowned champions
I am happy to be playing an active role in shaping up the youth system: Bembem Devi