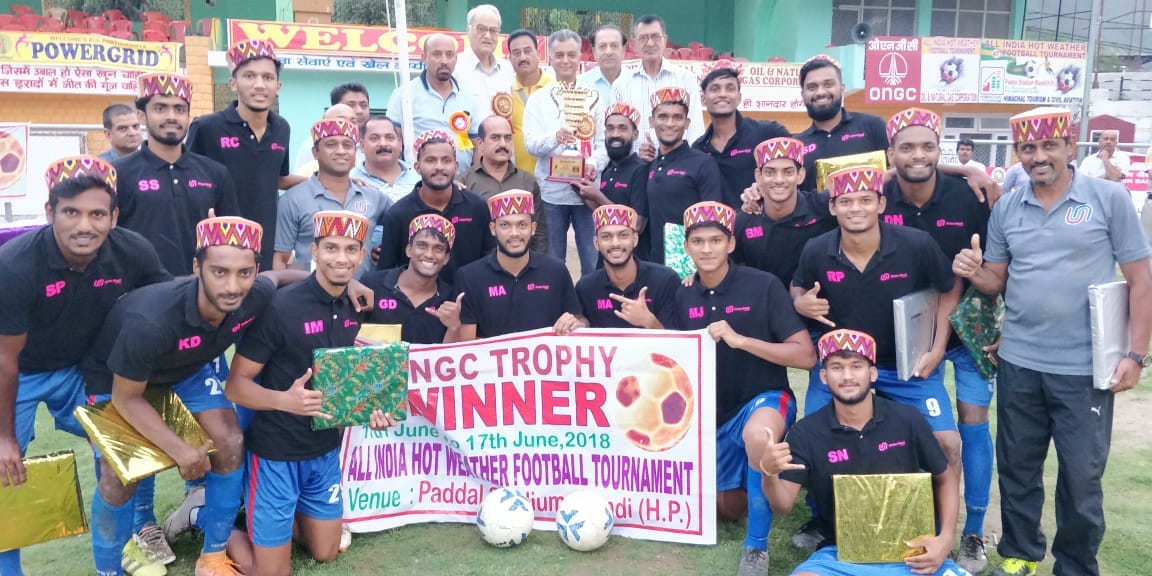 The Tournament kicked off with the qualifying stage before two pools with three teams began their journey. Pool A: Railway Police Kolkata, Bengal Engineering Group Roorkee and Union Bank of India (UBI), Pool B: Reserve Bank of India (All India CombineD), Mandi United and KMFC Burdwan. The likes of Punjab United and Tamil Nadu Police were among others in the knockout stage.

In the opening game against Railway Police Kolkata, a lone goal by striker Ranjeet Pandre proved enough as UBI registered their first win of the campaign. Coach Ryan D’Souza was quoted as saying: “The first game is always a challenge because you have to adjust yourself to the ground condition and cope with sudden rains. But our wingers which comprised of Bryce Miranda and Sherwyn Chang/Gaston D’Silva made good use of width to deliver inch-perfect crosses.”

“Strikers Ranjeet Pandre and Scott D’Souza were effective till we scored in the 16th minute. After taking the lead, it was much easier to penetrate but sadly we missed a couple of chances. The central-midfield of Shanon Pereira and Melroy and the backline of Dion Menezes, Riddick, Durwesh Nijap and Siddharth were great. They didn’t allow the opponent to have the upper hand,” Ryan added.

In the second game against Bengal Engineering Group Roorkee, a sublime penalty by Melroy Assisi and a goal from Bryce Miranda gave UBI a comfortable 2-0 win which was a crucial game for both the sides as BEG had won their first game 4-0. “The second game was a must-win game as BEG had won 4-0. We outplayed BEG by opening the scoring in the 12th minute via penalty and a few minutes later, Bryce scored the second.”

“We were two up in the first half and could have increased it by two more. Striker Scott was sent-off in the second-half but the team stood firm and played beautifully to shield our lead,” Coach Ryan said.

In the final, UBI faced RBI who was having a tremendous campaign as they blew away their opponents with ease in the previous games. But Coach Ryan and Julian D’Silva made sure to fire up the players before they stepped on the field. Striker Mohammad Ishaq and Shanon Pereira scored apiece to give UBI a comprehensive win which helped them to lift the 47th All India Hot Weather Football Tournament ‘ONGC Trophy’.

“The Final was even more spirited as it was against the more experienced side. Our plan was to dominate and create chances from wings. Our delivery of crosses was spot on once again as Bryce creating numerous opportunities from the left-flank while Gaston with long throws in the penalty area was the best part. From the beginning, they provided many deliveries for our strikers, attacking mids and defenders (during dead ball situation) and we scored in the 12th-minute.

Their defence was under great pressure and immediately after a few minutes, a delivery from the right was cleared on the top of the box for Shanon who blasted a screamer. We continued to dominate the midfield and gave them fewer chances to score. Shanon and Melroy were instrumental in holding the ship. Although the latter received a red card in the dying moments of the match. It was really a great tournament which was highlighted by an excellent team spirit, great focus, good preparation and perfect execution of plan,” Coach Ryan concluded.

Preview: Buoyant Russia face Egypt in Group A encounter
Hero I-League to continue during the AFC Asian Cup but not on the day India plays