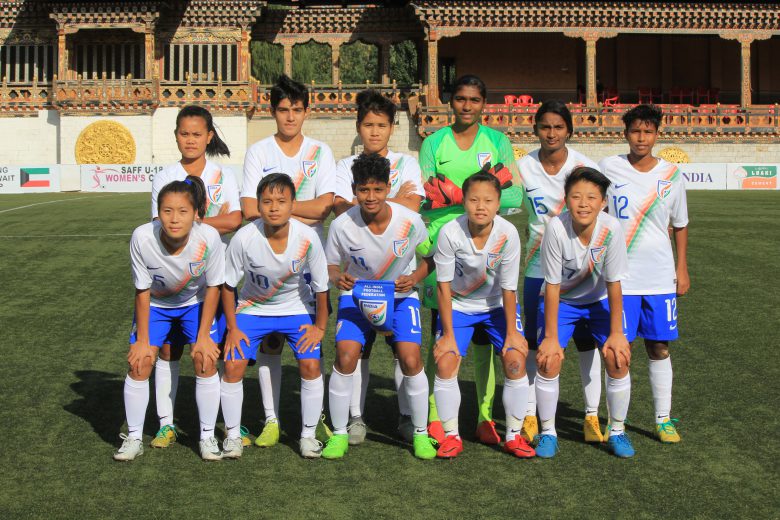 The Indian U-18 Women’s National Team finished third in the SAFF U-18 Championship after defeating hosts Bhutan 1-0 in the 3rd place match at the Changlimithang Stadium in Thimphu, Bhutan today (October 07, 2018).

Devneta Roy’s 73rd minute strike proved to be the difference between the two teams in a tight match where both teams matched each other blow for blow. The Indian eves controlled the tempo of the match in the opening minutes and dominated possession. In the 11th minute, a shot for India from inside the box went inches past the goal as the eves tried to take an early lead.

Four minutes later, Devneta Roy failed to tap home from close range after a cross from the left flank found her. Two back to back chances for Balamurugan failed to see the light the day as the Indian eves upped the ante. First, in the 24th minute her shot from inside the box went past goal from a tight angle and in the 27th minute, with no real pressure her header went over the bar.

The Indian Women tried to make the most of the corner kicks, but could not find the back of the Bhutanese net on the scenarios. With Bhutan restoring to counter attack football, the Indian Women attacked in hordes. In the 73rd minute, Devneta Roy, after sidestepping her marking defender, lobbed the ball over the opposition custodian to give India a solitary goal lead.

Trying to extend the lead, the Indian forwards kept hammering the Bhutanese defence line but failed to create a clear goal scoring chance. The full-time scoreline read 1-0 as the Indian Women registered a hard fought win.

Also Read: Probables for China friendly announced, 13 U23 players in the