Bengaluru FC to face Barcelona B, Villarreal B in pre-season friendly 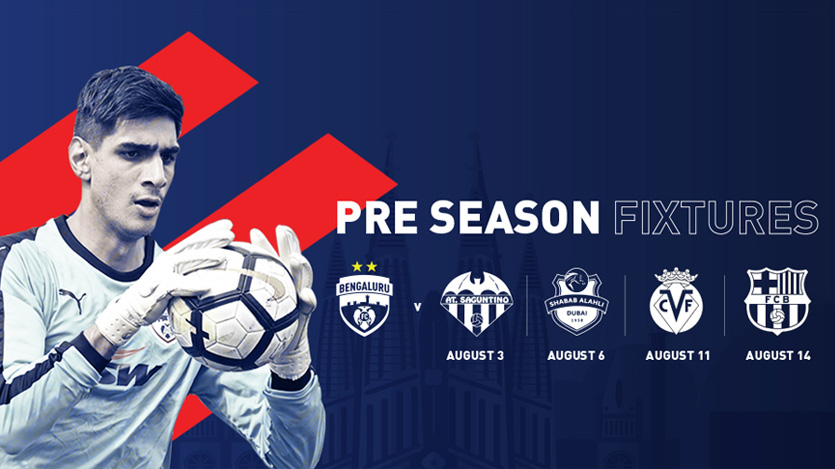 Blues To Train At Valencia-Based Facility During Two-Week Camp In August; Opponents Include Shabab Al Ahli Dubai, Atletico Saguntino, Barcelona B and Villareal B side

Bengaluru: Bengaluru FC depart for Spain On July 30 for a fortnight-long pre-season camp that includes games against the reserve sides of Spanish giants FC Barcelona and Villarreal, the club announced on Friday.

In preparation for their two-legged Inter-Zone clash against Turkmenistan’s Altyn Asyr FC later next month, the Blues will play a series of friendly games in the Iberian Peninsula, which include clashes against 2015 AFC Champions League runners-up Shabab Al Ahli Dubai FC and Spanish Segunda B side, Atletico Saguntino.

Bengaluru will be training at Soccer’s Masía La Grava facility in Valencia. This will be the second phase of the pre-season for Carles Cuadrat’s men after completing a 10-day camp at the club’s residential facility in Bellary.

While in Spain, Bengaluru FC will be playing friendlies against Segunda División B side Atlético Saguntino at the same facility, followed by a clash against UAE Pro-League side Shabab Al Ahli Dubai FC in Alicante. The Blues will then take on reserve sides of La Liga giants Villarreal CF and FC Barcelona in away games during the second half of their stay, with the game against the Catalans to be played at the 15,000-plus seater Mini Estadi in Barcelona.

“We are really looking forward to what promises to be a very valuable pre-season tour in Spain.  What’s key is the quality of opposition that we will be coming up against. Barcelona B and Villarreal B are massive clubs who work very well with their youth. It’s where players like Xavi, Iniesta and Santi Cazorla have come through. Equally tough will be our game against Shabab Al Ahli who were runners-up to Guangzhou Evergrande in the 2015 AFC Champions League final,” said Cuadrat on the prospect of facing quality opponents ahead of the big game in the AFC Cup.

Interestingly, it will be the first time ex-Barca B playmaker Dimas Delgado faces his former side since the 3-1 loss in January 2015 while playing for Recreativo De Huelva in the Segunda División. Back in 2006-07, it was Dimas who skippered then Pep Guardiola-coached side in the same division. In fact, it will be a homecoming of sorts for Cuadrat who was part of the launch ceremony of the stadium, thirty six years ago.

“I am also very excited that we will be playing a game at the Mini Estadi (Barcelona B) because I was part of programme to inaugurate the stadium in 1982 and it was my home turf for the next six years. I have a lot of fond memories from my time there and it’s nice to be able to return in a different capacity,” added Cuadrat.

The squad will return back to Bengaluru on August 15 ahead of their first leg clash against Altyn Asyr on August 22 at the Kanteerava Stadium followed by the return leg on August 29 in Turkmenistan.

At the start of the 2017-18 season, the Blues trained at Pinatar Arena in Murcia for ten days while playing friendly games against Segunda B sides UCAM Murcia CF, FC Cartagena and UAE’s Baniyas S&R.