People wanted me to study and get Government Jobs: Nishu Kumar 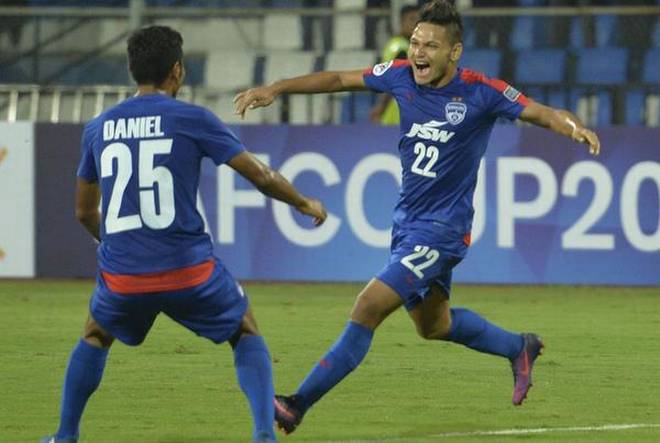 The 20 year old prodigy has become a regular member in the BFC starting line but back home in Muzaffarnagar, Government Jobs and Cricket still rules

Alongside former Barcelona assistant Coach Albert Roca and Bengaluru FC fan favourite English defender John Johnson sat a 20-year old young left back from Muzaffarnagar, shying away from eye contact and with short answers and huge smile on his face, Nishu Kumar is now all set to make his debut into the Indian Super League.

Being from a small town of Muzaffarnagar in UP, Nishu Kumar has gone on to represent India in various age group levels and later reached AFC Cup finals with Bengaluru FC. But still back home people know very little about it. “Cricket is still number one there, people know very little about football and so they would come up to me and say emphasis more on Government jobs than sports.” But despite the external pressure, Nishu credits his family very much for being supportive in his journey of football.

Having picked up the sport with the aim of making it to the Lucknow Sports College Nishu started to take it seriously, “For 2-3 months we would play football,” says Kumar. “Some of the boys playing with us were already in the hostel in Lucknow Sports College, and that’s where I wanted to go. I thought football could be a way of getting into the hostel.” Kumar won a spot at the sports hostel and from then on there was no looking back. He soon shifted to the Chandigarh Football Academy where he was picked up for the AIFF Elite Academy and played for India at the under-17 and Under-19 level.

Having started out as a striker, Nishu soon shifted to Centre-back position after the recommendation at AIFF academy and later on shifted to left where he grew in to the game even more.

“When I was picked by AIFF Academy in 2013, that’s when I actually thought I could be a professional football player,” he says. In 2015, Kumar was snapped up by then BFC Coach Ashley Westwood alongside Daniel Lalhlimpuia and Malsawmzuala.

“Bengaluru FC has very good fans and have shown a lot of love towards me. For me, they are the best and I love to play for Bengaluru FC and the fans” Nishu on what he likes about the Bengaluru FC. Playing alongside Indian Captain Sunil Chhetri has definitely helped as the he credits his captain for motivating him continuously to reach greater heights.

Nishu’s achievement hasn’t completely gone unnoticed back home as he stated “Kids around my neighbour have started to pick football as a sport and parents are encouraging them with admission to academies, but still there is a lot to go.” Hopefully with age on his side Nishu could achieve even more in his career inspiring a whole new generation back home.

When asked about what he looks forward to achieve next, Nishu warily replies, “The next goal is getting into the Indian national team.” Having already been in probable squad for the senior national team, Nishu’s debut in National colours for the senior team is not far from possibility.