Why India vs Nepal friendly fixture is important?

After the sudden unexpected pullout of Lebanon football team due to Visa complications, AIFF did well to immediately bring in a replacement team in Nepal and not waste an important friendly fixture just before Asian Cup qualifying game against Kyrgyzstan Republic 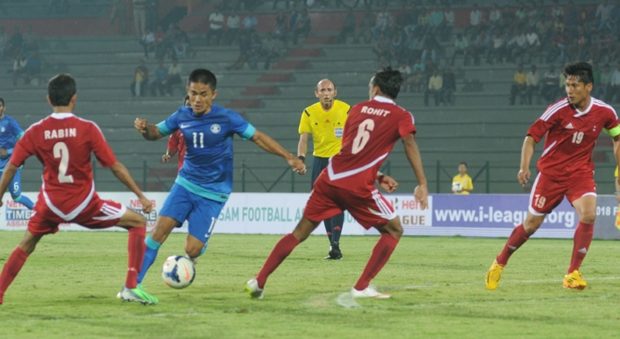 Indian football team will face off against neighbors Nepal at the Andheri Sports Complex in Mumbai on June 06. The friendly will be benefiting for both the teams as they are preparing for the second matches of their respective AFC Asian Cup 2019 qualifiers. Nepal are playing against Yemen at home on June 13 while India face groups strongest contender Kyrgyz Republic on the same day in Bengaluru.

India has been ascending in the FiFA ranking since last 12 months. With the important win against then higher ranked Puerto Rico and with losses in the 2018 world Cup qualifiers reduced in the Ranking equation, India gained sufficient points to jump into the top 100 teams. However after the win against Puerto Rico India went seven months without a friendly and since last September have played just two games in nine months. This will seriously affect the rankings once September comes and points gained in Puerto Rico game lose value. So the two games in June become very important for India to continue it’s ascend.

While Lebanon are comparatively higher ranked and stronger team then Nepal standing at 137 to Nepal’s 170th. A game against know opponent will definitely benefit the Indians in their preparations against Kyrgyzstan while also increasing their chances of win and subsequently gaining points.

Importance of this friendly was not ignored by India coach Stephen Constantine, who commended AIFF for arranging the replacement while also thanking Nepal Football Association.  “With Lebanon pulling out at the 11th hour, our preparations had suffered a jolt. It was disappointing but at the same time the situation was beyond our control. It was just so hard to find a replacement as all other Teams had already finalised their schedule. But thanks to my colleagues in the AIFF, we managed to rope in a team at such a short notice and that’s highly commendable,”

“I need to thank the Nepal FA for accepting our request. Personally, I have huge respect for Nepalese people and we look forward to a great match,” Constantine added.

The last time the two sides met each other, India had beaten Nepal 4-1 in a South Asian Football Federation (SAFF) Championship fixture in December 2015. Since then both sides have improved a lot, while India has won few friendlies and the opening game against Maldives, Nepal played about 13 games in the mean time some official some unofficial. Apart from the recent loss against Philippines, Nepal were unbeaten for 12 games winning seven and drawing five while also winning two tournaments in AFC Solidarity cup and Bangabandhu cup during the same period.

India vs Nepal has always gained some rivalry among the fans of either side, so when India take on Nepal in June 6 it won’t be just to brushen up match practice but also to make sure the team gets in its winning momentum to improve the rankings.

INDIA’s INTERNATIONAL FOOTBALLING FIXTURES TO BE BROADCAST LIVE ON STAR SPORTS
You can not build a team in a month: Constantine