Magic Bus comeback to steal a point against Kapadia Nagar

Magic Bus thwarted Kapadia Nagar S.C. with a late goal from the spot to earn a 2-2 draw  in the 3rd division match of M.D.F.A. (Mumbai District Football Association) at St Xavier’s ground, Parel on 6th  May 2015. Anuj Vaishya from Magic Bus and Shohaib Shah from Kapadia Nagar had good games.

Kapadia Nagar’s Shaikh Areeb curled home in 7th minute to give them the lead. Shohaib Shah tried to score but it rebounded off goalkeeper and Shaikh Areeb latched onto the rebound from the goalkeeper and fired on target. It was a spectacular move made which resulted in the opening goal.

Kapadia Nagar’s Shohaib Shah however gave them a commanding lead in 11th minute as he skipped the goalkeeper and turned his shot towards left and shot into left corner. Kapadia Nagar were 2-0 up and in complete control.

Magic Bus missed a great opportunity to score from the penalty spot. Narendra Walmiki fired the shot from penalty spot but goalkeeper dived to his left and made a save. It was a glorious opportunity wasted for Magic Bus as a goal could have brought them right back into the game.

Magic Bus’s Narendra Walmiki compensated for the penalty miss, 5 minutes later from a free kick. Narendra Walmiki’s header struck the ball into the goal with a pass from the striker from just outside the penalty box. Magic Bus grabbed the chance and made their presence felt.

2 minutes later Kapadia Nagar’s Taha Shaikh got a good ball and directed it towards the goal. Magic Bus’s Anuj Vaishya defended well by giving a sliding tackle to Taha Shaikh’s shot. It was a good piece of defending from Anuj Vasihya and it prevented Kapadia Nagar from restoring the two goal lead.

Kapadia Nagar went into the break with a slender 2-1 lead.

Second half saw the comeback for Magic Bus as they increased their attacks and the game was played in their opponent’s box.

Magic Bus’s Vijay Gupta gave a cross from the left win to Asadul Khan inside the penalty box in 30th minute. Asadul Khan failed to control the ball and the ball went outside the field. It was a good chance for Magic Bus to equalize their score with Kapadia nagar.

Kapadia Nagar’s Taha Shaikh got a cross from Left wing in 37th minute as he controlled the ball and made efforts to shoot on target. Magic Bus’s Anuj Vaishya managed to clear the danger.

The 41st minute brought the game on an even kneel after Magic Bus’s Hemant Shaikh smashed on the target from the penalty spot to make it 2-2 as Magic Bus made a great comeback to steal a point after being 2-0 down. 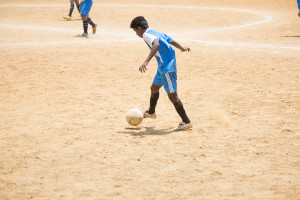 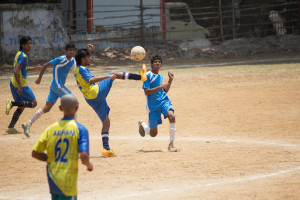 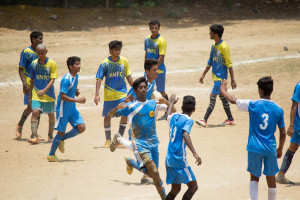 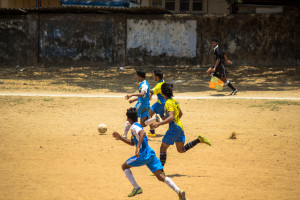