Training with Zico is a dream come true

Panaji, 1st Oct 2014: Till some days back Romeo Fernandes from Assolna would have just read or heard about Zico.

Thanks to this stint with FC Goa, Goan lads like Romeo or Rowilson Rodrigues are not only witnessing the Brazilian legend in flesh and blood, but are also soaking in the words of wisdom and techniques shared by Zico, the team’s marquee coach has on offer. 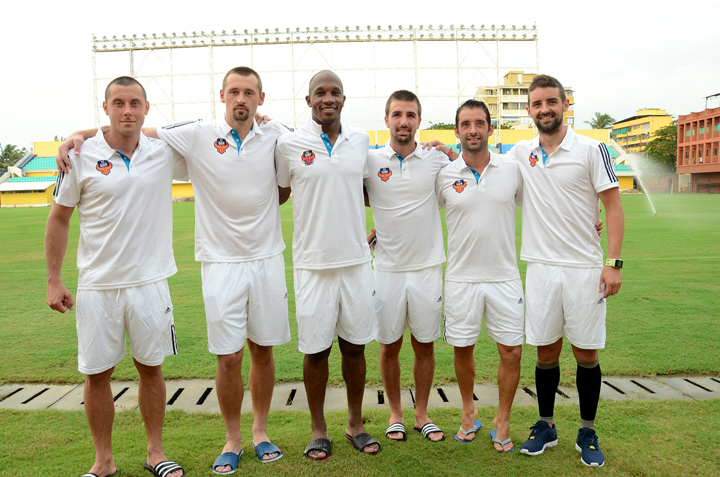 And of course there’s the other star French international and Arsenal star Robert Pires.
“Sometimes I can’t believe that I’m playing alongside Robert Pires and all these fantastic players. It’s a great learning for me on and off the field” said Romeo after his daily training session at Tilak Maidan, Vasco.

Over the last few weeks the boys at FC Goa have been going through rigorous training sessions under the expert eye of Zico. One of the finest players in the world in terms of strategy and professionalism, Zico has had an impressive coaching career since 2002 when he began coaching. And all the experience is bound to pay off for FC Goa and its players.

Said Portuguese FC Goa player Edgar Carvalho Figueria Marcelino, a former Portugal under-21 international, who rose through the ranks of the Sporting Lisbon academy, “It has been amazing training with the team. It has been especially great since we have a coach like Zico who was an exceptional player himself. Training with Zico is different every day. Some days he makes us train very rigorously and other days he just lets us be and lets us play our game, which is good since it helps us in understanding our game.” The well-travelled attacking midfielder has played in Spain, Netherlands, Cyprus, Morocco, and Oman, apart from his native Portugal before arriving into Goa.

Miguel Bruno Pereira Herlein echoed Edgar’s thoughts, “Zico has helped us a lot in improving our game. As and when we play he keeps giving us various tips on how we can improve. I think it’s a privilege that we are getting trained under him since he is such a great player. He has so much experience of coaching great teams and that experience is helping us a lot”.

After stops in Cyprus and Poland, as well as a brief return to Portugal, Pinheiro tasted success as part of the Maccabi Netanya team which earned promotion to Israel’s first division in 2013. Pinheiro has now made Goa his home for the next few weeks.

Haroon Amiri from Afghanistan who joined the squad three day ago said, “Being coached by Zico is a dream come true for any professional footballer. Its truly an honor”.