September 24th, 2014 Panaji, Goa: Former French international and Arsenal midfielder Robert Pires who has been signed on as a marquee player with team FC Goa stepped onto the ground at Tilak Maidan, Vasco for his first day of training with Brazilian coach Zico. 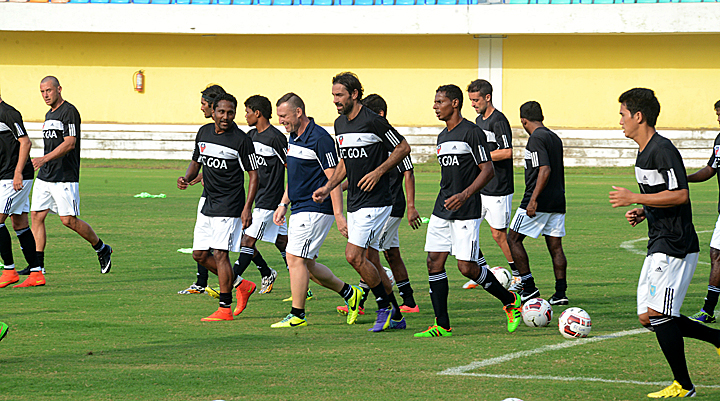 Said Robert Pires post the training session, “It’s been a good first day. It’s a good feeling. I’m excited about the ISL and I think it’s going to be a big success. It’s an honour being coached by the legend Zico. I’ve enjoyed my first day of training”

Speaking on his first thoughts on Goa and India said Robert, “I received a warm welcome in Mumbai when I arrived and in Goa when I landed yesterday. It was nice to see so many fans who came to welcome me. I didn’t expect it. It was a pleasure. Thank you very much for the welcome.”

Pires was part of the French national squad which won the 1992 and 2000 FIFA World Cup and the UEFA Euro finals respectively. He also represented France in the 1996 Olympic Games.

Pires’s club career is a trail of glory too. As a player he peaked during his six-year stint at Arsenal from 2000-06, where he was part of the squad which won three FA cups and two Premier League titles. He was also a part of the Arsenal squad nicknamed ‘The Invincibles’ which remained unbeaten through the season of 2003-04.

Pires has also represented FC Metz, Marseille, Villareal, Aston Villa and has played over 500 games in his career spanning over two decades. In the 79 games he played as a French international, Pires scored 14 goals.

Training has begun in full swing. FC Goa will train twice a day, Monday to Saturday at Tilak Maidan at 8am and 4pm.