The Adidas team kit unveiled at the ceremony

The Indian Super League club has already triggered a whirlwind of interest when it signed on a genuine Brazilian legend and three-time World Cupper Arthur Antunes Coimbra fondly known as Zico as its marquee coach. Zico has begun putting the FC Goa lads through the motions at team training sessions and is gearing for the first season of the ISL. 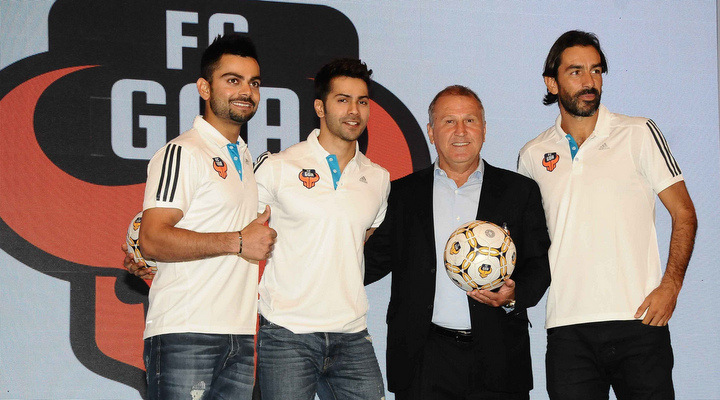 Former French international and Arsenal star Robert Pires, FC Goa’s marquee player was formally unveiled to the audience at the ceremony. Very few football aficionados would need an introduction to the star, who has been a part of the World Cup and Euro Cup winning squads for France and has won several club triumphs for Arsenal.

The Adidas team kit was also unveiled at the ceremony. Talking about the team kit, Tushar Goculdas, Brand Director, adidas India said, “adidas is the number one football brand in the world and we are excited to partner with FC Goa, the team representing one of the most passionate centres of football in India. The team is supported by a strong backbone, with owners having great footballing heritage, Virat- a world class athlete and passionate football fan and Zico, one of the greatest artists of the beautiful game. We are even more excited to unveil the team kit today, which has been created by our global design team and beautifully captures the essence of Goa. The team jersey will be available to FC Goa fans to buy in a few weeks.”

The big highlight at the event was the formal announcement of Virat Kohli, one of India’s finest contemporary cricketers, as the brand ambassador and co-owner of FC Goa. Kohli brings with him dynamism, grit and an unbridled energy, which are the elements that form the core of FC Goa.

Said Virat Kohli of his involvement in team FC Goa, “”FC Goa is going to be very competitive in the upcoming ISL. And the expertise and experience of stalwarts like Zico and Pires will further strengthen the already strong DNA that the team possesses, thanks to the Salgaocar, Dempo and Videcon  Groups’ involvement. I am very excited to be a part of this franchise in what definitely looks like a breakthrough for Football as a Sport in India”

Said Zico of his move to India, “There is a huge responsibility placed on my shoulders and I will do justice to it. I know expectations are high. I am motivated to take on this role of coach to FC Goa. Thank you for a wonderful welcome to India.”

Added Frenchman Robert Pires “I’m excited to play for FC Goa at the inaugural season of the ISL. I look forward to my time in Goa and India and to contribute positively to the development of football in the country.”

Mr. Venugopal N. Doot, Chairman of the Board, Videocon Industries, agreed saying, “These are exciting times for me and my partners Dattaraj Salgaocar and Shrinivas Dempo, who have shared a common dream – to make a valuable contribution to Indian football and elevate the standards of the sport in the country”.

Mr. Shrinivas Dempo Chairman and Managing Director of Dempo Group of Companies, said “The enthusiasm and interest in the sport is what drives us to invest in it. Football has always come before everything else. We are now looking forward to elevating the sport of football to a whole new level. ISL has provided us with the unique opportunity to create this change and infuse fresh enthusiasm into the sport.”

Added Mr. Dattaraj V. Salgaocar Managing Director of V M Salgaocar and Company, “ We have supported football for over five decades. The arrival and support of these two global football icons on the Indian footballing turf, marks the beginning of a glittering era for the ‘Beautiful Game’ in India.  The team embodies the spirit of Joga Bonito, playing the beautiful game the way it should be played – with pace, power and passion. That’s what team FC Goa will bring to the ISL”?

Said Varun Dhawan, “The moment I got to know about the ISL I wanted to be a part of it. I love football and it’s wonderful to see so much talent and enthusiasm around the sport”.
FC Goa will kick off the first game of the Indian Super League against Chennaiyin FC  at home on October 16. Other teams in the Indian Super League include Kerala Blasters, Chennaiyin FC, Mumbai City FC, FC Pune City, Delhi Dynamos, Atletico de Kolkata and North East United.

About the Indian Super League: The Hero Indian Super League (ISL) tournament is organized under the aegis of the All India Football Federation (AIFF). It is currently contested by eight teams from across India, played on a league basis (home and away games). The top four teams will qualify for the semi-finals and the winners of the double leg semi-finals will play in the finals. There will be 56 league matches and five knock-out matches held between October 13 and December 20, 2014.