The 108th Edition of the Nadkarni Cup will kick off from 26th November, 2014 at Rashtriya Chemical & Fertilizer (RFC) Sports complex in Chembur, Mumbai.

Being a tournament that started 108 years ago, the Nadkarni Cup is one of the most prestigious events in Mumbai football. It is considered as a the season opener of MDFA (Mumbai District Football Association) League for the elite Division teams but unfortunately this year it has been scheduled late November due to the delay in the monsoons.

This tournament features all the top teams of MDFA Elite Division League and is played on a knockout basis. This format has seen some very exciting matches over the years at the RCF grounds.

The former I-League team ONGC, certainly seem to be the favourites in this 108th Edition, Air India too look like strong contenders and there is no ruling out the newly crowned All India Inter – Railways Champions, Western Railway.

Mumbai Customs, who are currently in superb form in the Elite Division are still unbeaten this season, with some young and talented players in their squad, this well knit unit is another favourite in the 108th edition of the RFC Nadkarni Cup 2014.

With all competitive teams and an amazing atmosphere at the RCF sports complex, this event is going to be entertaining and action packed.

Football Counter wishes all the participating teams the very best!

Following are the fixture of 108th Edition of RCF Nadkarni Cup 2014. 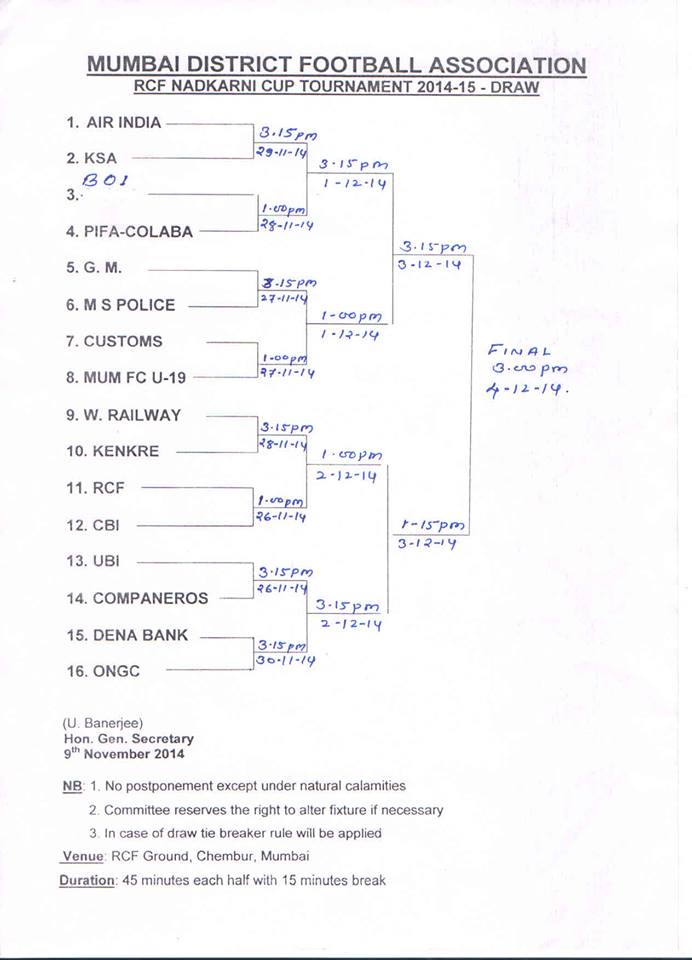