Noah Sadaoui: We kept the fight going together 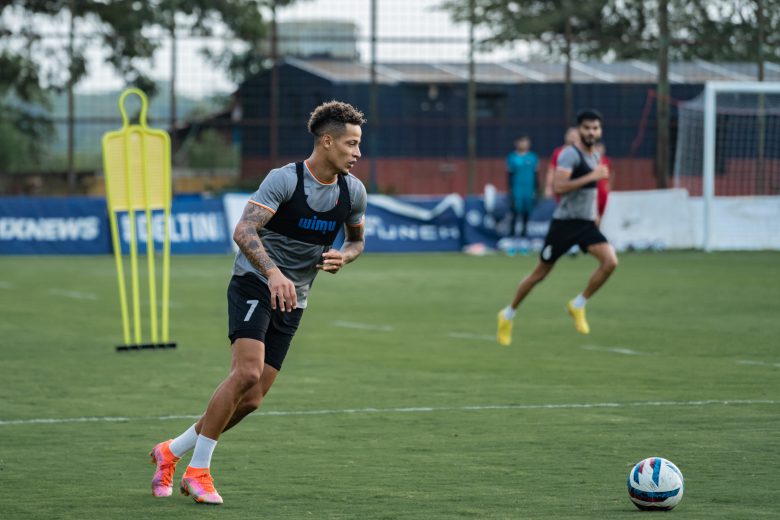 While Goa’s campaign opener against East Bengal FC showed fans a few glimpses of what the 29-year-old was capable of, he then took it to the next level as they beat Chennaiyin FC 2-0.

In the 10th minute, Sadaoui latched onto a long pass from Edu Bedia and sprinted into the opposition box, before firing in a cross that was guided home by Redeem Tlang for an early lead. Later, during stoppage time, he picked up another long ball and beat the goalkeeper himself to seal the winner and three points.

“Very happy with the win and three points,” the forward told fcgoa.in after the match. He, however, downplayed his contributions and credited the team’s effort as a whole for the result.

“Yes, it feels nice that I could contribute, but the whole team did very well as a unit. It wasn’t an easy game, but we kept the fight going together and that’s the biggest reason for our victory.”

First goal, hopefully the first of many

Noah Sadaoui’s late strike that ensured FC Goa’s win over the Marina Machans was also his first-ever goal in the Hero ISL. “I’m grateful for the opportunity I got. Early on in the match, I understood that there were spaces in our opponents’ defence which I felt I could exploit, and I kept trying to do so. A part of the credit for my goal should also go to my teammates who were quite supportive, sending passes my way, perhaps seeing what I was trying to do,” he explained.

The win against Chennaiyin FC also meant FC Goa are the only team this season to take home all the six points on offer from the first two matches. As a result, the Gaurs are currently on the top of the standings as well.

“Well, we’ve gotten a good start to our campaign. Our position on the points table also gives us a lot of joy. Going forward, we must ensure that we maintain this over the course of the season,” Sadaoui said, when asked about the mood in the Goa camp.

“Our next assignment is against Hyderabad FC and it’s another away match. Our focus now shifts to that game – we want to win and return to play our first home clash on a highly positive note,” he concluded.