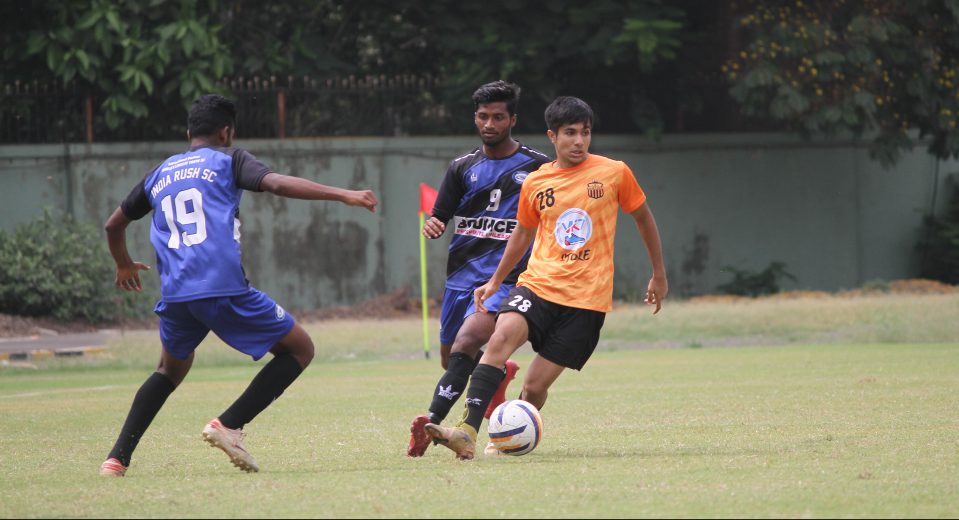 Goals on either side of half give PIFA a comfortable 2-0 win while Iron born CFCI edge past Sellebrity FC in a roller coaster game.

Match 61 saw PIFA take on Bombay Muslim at the Cooperage stadium. Looking for their 3rd consecutive win, PIFA started off in a dominant fashion and always looked likely to sneak in a goal.

It didn’t take them long to find one when midway through the first half PIFA won a penalty Calvin Barreto converted the spot-kick to make it 1-0. PIFA continued their dominance and midway through the 2nd half found the second goal when Rohit Mirza latched onto Shamer Swamy’s pass to find the net.

The game ended 2-0 in favour of PIFA

In the first game of the day at Mumbai Football Arena, India Rush Sc were held onto a 1-1 draw by Salsette FC.

The game began with Salsette FC coming off the blocks quickly and applying pressure on India Rush SC from the word go. The early pressure paid off as Aditya Despande capitalized on a defensive miss pass to find Sameer Sawant in space who slotted home the opener in the very first minute of the game.

India Rush soon started getting into the rhythm and attacking more in search of an equalizer and were eventually rewarded at the stroke of halftime when Abhishek Chakraborty headed home the cross from Pradip Pal to make it 1-1. The second half saw some back and forth but no goals as the game ended 1-1 at the full-time whistle

In the 2nd game of the day at Mumbai Football Arena, Iron Born-CFCI beat Sellebrity FC by 3-2 in a rollercoaster of a game.

Arfat Ansari opened the scoring in the 24th minute as Iron Born took the early lead. In the 3rd minute of first-half injury time, Sellebrity were given a route in when the referee pointed to the spot-kick. Shailesh Jadhav made no mistake to make 1-1 as both teams entered the break.

A frantic start in the second half saw Sellebrity take the lead in a matter of 3 minutes when Brendan Pires‘s shot found the back of net. Iron Born made a quick comeback when they won a penalty of their own as Arfat completed his brace with a clinical finish.