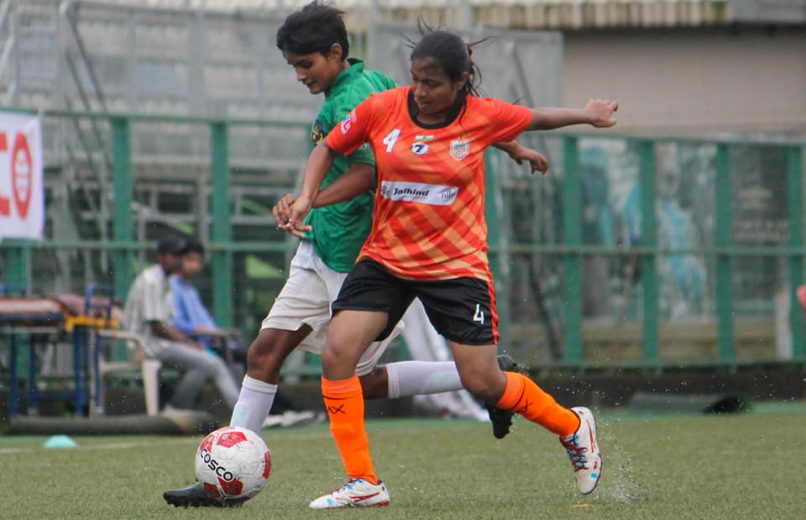 The match started off with great intensity from the Kolhapur outfit as they dominated the early proceedings. However, Warriors of Kolhapur SC attackers seemed to have an off day in front of goal as they missed numerous chances to take the lead with one of the biggest chances falling to Tanvi Kore, who missed a sitter in front of goal. Kolhapur’s profligacy coupled with some fine defensive setup of Footie first meant the score remained 0-0 at the break.

The second half began on a similar note with Kolhapur girls continuing to create chances in front of the goal. Finally, in the 54th minute, Sanika Patel broke the deadlock with a fine shot past the keeper after a wonderful build-up play from the team.

At the other end, Footie First had a pragmatic approach as they sat back and soaked up the pressure. Looking to work on a counter, Footie first had a chance to level the scores when a cross into the box was somehow missed by two unmarked strikers with Kolhapur clearing their lines immediately. Footie First skipper Priyanka Gurung was one of the few positives for the side as she looked lively in the attack carving out some good chances for her side.

The second match of the day showcased some sluggish football amidst heavy rains as both Kenkre and Puneri Warriors ended with a point each.

Kenkre dominated the initial exchanges as players went for the ball every time they lost the ball. They were soon in the 8th minute when Ankush opened the scoring through a header thereby Kenkre taking the 1-0 lead.

The match soon turned physical with many tackles flying from both teams. With the heavy downpour playing its part, the pitch was waterlogged as players from both sides found it difficult to keep hold of the ball for a long time.

Jersey no. 14 Nishka Prakash of Kenkre FC was a lively figure throughout the match causing all kinds of problems for the Puneri Warriors.

With the game slipping away, Puneri Warriors started attacking more looking for an equalizer. Their offensive game plan was still well dealt by Kenkre’s defense as the game headed towards the final 10 minutes. The continuous pressure finally paid off when Puneri skipper Rutuja Gunwant smashed a powerful shot from 25 yards out that Kenkre Keeper failed to deal with properly as the ball slipped past her to make it 1-1.