From street football to I-League 2nd division: the inspiring story of Daniel Muthu

From playing football in the streets of Mumbai to representing FC Bengaluru United in the 2nd Division League, young Daniel Muthu’s story remains an inspiration for all budding footballers.

Footballcounter went up and close with Daniel to uncover his incredible journey. The 24-year-old defined his progression and outplayed his hardships through discipline and determination while dreaming big at the same time. Here, he speaks about his journey, the challenges, the struggles, the fortunes and the way ahead.

#1. When did you start playing football? Was making a career in football always a thought?

My journey of falling in love with this beautiful game began when I was nine years old. Football was a favourite pastime in summer, but slowly, it changed my life.

Initial foundations were laid in Sacred Heart School, Vashi. There, I met my first coach Mr Peter Ochando from Kenya, who improved my basics.

Growing up, usually, people around tried to convince me that football can’t be my profession. But in my head, I was very clear that I want to be a footballer. For that, since the beginning, I have tried to work hard and convert my passion into a profession.

#2 What were the challenges you faced in your journey, and how did you tackle them?

I started on a very bad note. I had an ACL injury which took time to heal. Football is a game that demands high performance and aptitude. This injury was a massive blow to me emotionally and physically. I was out of the game for almost a year and couldn’t walk during that time.

But adversities are the best teacher of life. I’m blessed to have my parents by my side. They have always supported me in my ups and downs.

Nothing is guaranteed in football. The best way is to learn and unlearn, work harder and try earning things for yourself.

#3 Which teams have you represented till now and what were the learnings?

My first stint was with my school team, where I represented the team in various inter-district tournaments. Later, when I turned 14, Springfield FC came in my way, where I got the chance to play in the first division.

After that, I went to the Air India U-15 youth team to play in the Manchester United Premier Cup. The same year, because of my performances, I was promoted to the U-19 team, where I spent my youth career (2 years), learnt a lot and also won the Super Division League.

Then came my time in the MDFA Elite division with Union Bank of India, where I stayed for a year and went back to Air India.

However, after the stint with Air India, came the major injury where I was sidelined for a year. After a long recovery, it was difficult landing contracts, and it mounted pressure.

Finally, an opportunity with U-Mumba came along. Then came ARA FC, where I learned more about professional football as we played in the I-League 2nd division. After that, finally, FC Bengaluru United happened.

#4 Tell us about the coaches and mentors who have shaped you as a professional?

I have been very lucky and fortunate to train under some of the best coaches in India. Starting from my school coach Mr Peter Ochando and then Amin Bhaskar, Godfrey Pereira, Shyam Sawant, Anthony Fernandes, Julian D’silva, Vivek Nagul, Richard Hood and many more. This year, former Indian football player Bimal Ghosh sir has helped me a lot in various aspects, which I guess can be career-changing.

Singling out would be difficult as a favourite, but Mr Sunil Poojari has a unique contribution to my career. He has been guiding me in all those formative years and continues to.

#5 Tell me something about your time with FC Bengaluru United?

Bengaluru United offer was like a blessing in disguise!

The last year was tough, I guess, for every athlete due to the ongoing pandemic. But I kept doing what I needed to and got the FCBU opportunity. It exposed me to a whole different level of professionalism under the expertise of coach Richard Hood and Indian legend Gouramangi Sir.

The season didn’t go as we wanted, but many learnings bestowed by my seniors will benefit the team in future challenges. I thank Bengaluru United for giving me this opportunity. 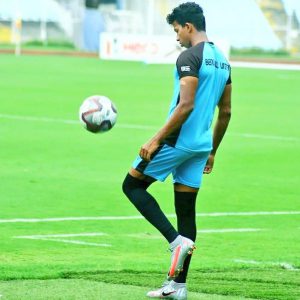 #6 What’s your take on Mumbai Football?

At this moment, Mumbai football desperately needs a team that competes in the I-League. A bunch of talented players is waiting to burst onto the scene. So, I hope that happens. Mumbai football has had a legacy that needs to be revived.

Daniel wishes to continue with his team and fare better in the coming season. He believes with patience and faith, everything falls in place. And it’s always worth the wait.

Daniel also mentioned that he wants to follow the footsteps of his idol Rahul Bheke, who plays for Bengaluru FC and is also from Mumbai. He thanked his family and especially his brother Antonio, who has been a crucial part in achieving what he has done to date.

Eventually, Daniel aspires to play in the ISL, but his ultimate goal is to don the National colours.

Also Read: Indian football team set to leave for Qatar on May 19 for World Cup Qualifiers