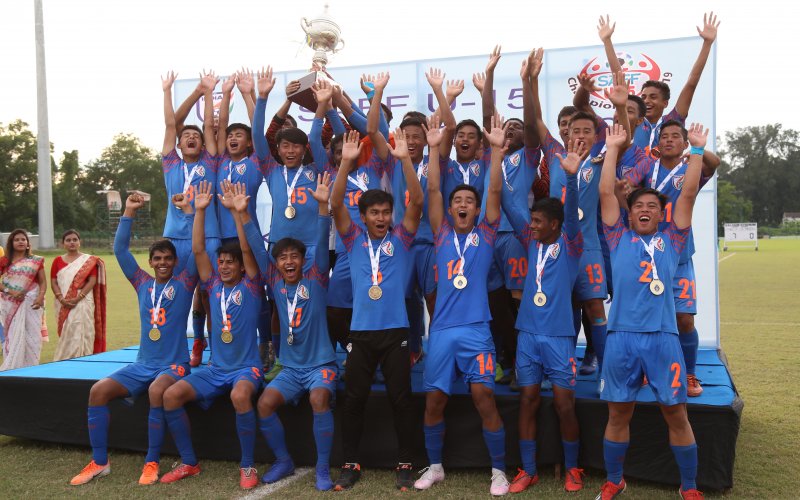 Former India U-16 National Team captain Vikram Partap Singh believes that the current batch under head coach Bibiano Fernandes is better than his own batch that was 90 minutes away from direct qualification for the FIFA U-17 World Cup two years ago.

In a live chat with AIFF TV, Vikram said, “I have seen the current U-16 team and I believe that they are better than us and if they keep performing the way they have been, then they can qualify for the (U-17) World Cup.”

“There is so much work being done on the youth level. I feel that our U-16 teams will keep qualifying for the AFC Championships every time, and hopefully, we could play a World Cup very soon.

“The current batch has such good control over the ball, it is just amazing to watch them,” Vikram, who had led the India side to the quarterfinals of the AFC U-16 Championships 2018 in Malaysia, continued.

Reflecting on his formative years in football, Vikram said that the fact that India was hosting the FIFA U-17 World Cup 2017 motivated him to work hard to make his way up the ranks.

“It was always a dream to represent India in a World Cup. So when I heard that India will be hosting the U-17 World Cup, I was really excited,” the youngster quipped.

“I used to train with Amarjit (India’s captain at the FIFA U-17 World Cup) in Chandigarh and I got really motivated when I saw that he was selected for the World Cup squad.”

Vikram went on to be selected for the India U-16s later on and led the team that progressed past the likes of Indonesia, Iran and Vietnam from the Group Stage to the quarterfinals, where they faced Korea Republic.

Reaching the semifinal would have ensured a direct spot in next year’s FIFA U-17 World Cup. However, the Blue Colts went down fighting by a 0-1 margin.

“It was really heartbreaking to be so close, yet so far. We knew that as a team, we could have played the World Cup as we had really worked hard, and it was visible,” said Vikram, who made the step up to professional level with the AIFF’s developmental side Indian Arrows in the Hero I-League.

“Given the opportunity of a rematch, I think we could have progressed, but that is not to be.”

The former U-16 captain further went on to praise goalkeeper Niraj Kumar, who had put out a fine display during the tournament — conceding a solitary goal in the four matches that India played and saving a crucial penalty against Iran.

“Niraj had performed really well that time. Had he not saved that penalty against Iran, the results could have been very different. His presence between the sticks calmed the rest of us, and we outfielders could play more freely, knowing that he was manning the back,” Vikram averred.